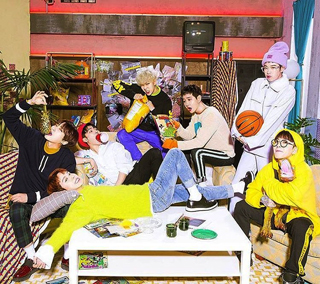 Boy band Block B blazed to the top of the charts on Monday with their newest single “Yesterday.”

The song, which was written and composed by band member Park Kyung, is a modern take on the pop-funk genre.

“I’m so thankful that we performed so well on the charts with a song I produced,” said Park. “I felt very worried and anxious.”

His fellow bandmate, B-Bomb, similarly expressed delight over their chart performance. “I never even dreamed that we would hit number one,” he said. “It’s also been a while since we came together as a group, so I think this first place made the members even happier.”

The music release is their first in ten months since they unveiled their previous record, “Blooming Period,” last April. Its members have since been focusing on their solo careers, with members Zico and Park Kyung in particular releasing successful solo music efforts.

The group’s first performance of their new single is expected to be held at their upcoming fan meeting scheduled on Saturday.