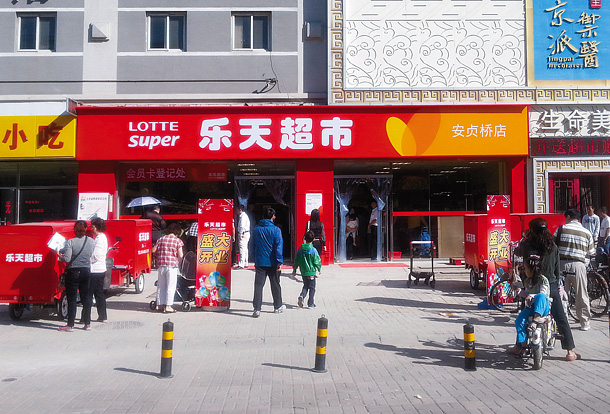 Lotte Super, a supermarket affiliate of Lotte Group, may shut down three branches in Beijing, although it denied this was caused by the Chinese government’s retaliation against Korea for deploying an anti-missile system.

“The final result is scheduled to be announced within this month,” the spokesman added.

“This is just the result of an annual management checkup,” said the spokesman.

“The three branches have posted weak operating profits in recent years. This is not the first time we have closed down branches that didn’t generate enough profit. There were shutdowns last year and the year before that as well.”

Beijing’s hostility towards Korean business in China has been growing over the past three months, and especially to affiliates of Lotte Group, which is providing the land on which the missile defense system will be deployed in Seongju, North Gyeongsang.

In November, Beijing rolled out unprecedented tax audits and safety check of some 150 factories, storage facilities and store branches of Lotte affiliates, including Lotte Department Store, Lotte Confectionery and Lotte Super. At the time, a group spokesman said it was “unusual” for the Chinese government to conduct inspections simultaneously on multiple affiliates.

In fact, one of the Lotte sites that was subject to an abrupt safety inspection had been given an award by the local fire department for its first-rate safety systems.

In the face of such retaliation against its businesses, Lotte Group has been delaying final approval of swapping a golf course, which will be the Thaad battery’s home, for a plot of land in Namyangju, Gyeonggi, currently owned by the Korean military.

Board members of Lotte International, which owns the golf course, held a meeting on Feb. 3, which delayed a final decision. The company said it would hold another meeting soon.

Maintaining good relations with the Chinese government is crucial for Lotte because it operates many retail operations in China and gets much of its business in its duty free shops from Chinese customers.

Lotte Department Store set up a joint venture with China’s state-owned Citi Group in October to advance into Shanghai, a new market for Lotte affiliates. The department store held a business fair on Jan. 20 to attract Korean brands that wish to go into Shanghai.