Students mine Brazil for golden opportunities

Students mine Brazil for golden opportunities 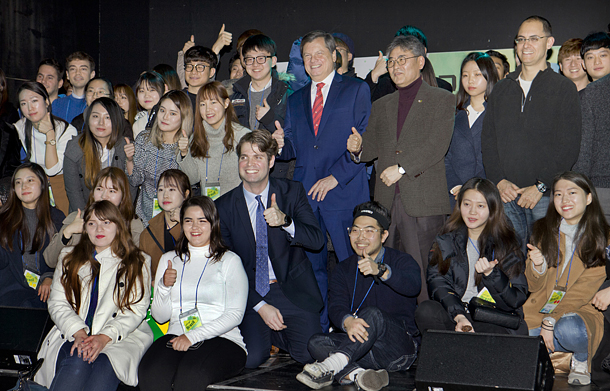 Brazilian Ambassador Luis Fernando Serra, center, stands with students who participated in a seminar on studying in Brazil hosted by the Embassy of Brazil at the Seoul City Hall in central Seoul on Saturday. [PARK SANG-MOON]

Though it was still in the middle of the winter break for college students, the seminar room in the basement of Seoul City Hall, central Seoul, was packed with them on Saturday morning, many chatting rapidly in Portuguese and more filing into the room to register for the Brazilian Embassy’s first-ever seminar in Seoul on studying abroad in the South American country.

“I chose to go to Brazil because I knew that if I enroll at a popular destination college among Korean students, I will always be second-best,” said Bae Joon-young, a graduate of Sungkyunkwan University in central Seoul who works at the Korea Engineering Plastics’ international sales department. “Today, it is still rare to find Koreans who speak Portuguese and this really widens your job prospects.”

Bae added, “Plus, as a student studying business administration at the time, I took some of the best classes on the major during my study aboard semester at Fundacao Getulio Vargas in Sao Paulo in 2008. The classes were taught by CEOs and executives of financial institutes in Brazil, and there were students from Sweden, Finland, Germany, the Netherlands and Taiwan studying with me at the university.”

Some 50 to 60 students listened intently to Bae and other students as they shared their experience in finding study abroad and internship programs in Brazil.

“The first time I was in Brazil was when I volunteered at a rural village in Bahia,” said Koo Hye-won, a senior majoring in business administration at Seoul National University. “I took a bus for seven hours from Salvador, took another bus for one hour, and then a motorcycle-cab until I reached this rural village.”

Koo shared her experience in adjusting to life in the rural village, where only one household owned a car, and rarely any had personal bathrooms built in their houses.

“I didn’t speak a single word of Portuguese at the time, and I suddenly found myself in this new world,” she said. “And it turned out to be a turning point in my life, actually.”

Though it was the first time that the Embassy of Brazil in Seoul hosted an event to promote studying abroad in Brazil, the turnout was higher than expected.

“We are so excited to have you here today, and the turnout is beyond what we expected when we first planned this event,” said Carlos Gorito, education advisor at the embassy.

The embassy distributed some 100-page book detailing information ranging from the educational system in Brazil and visa application process to specific programs at universities.

“As far as we know, some 500 Brazilian students have studied in Korea,” said Kim Yong-jae, executive secretary at the Korea Brazil Society (Kobras), a private organization established in 2010 to boost cultural and business exchanges between the two countries. “And every year, Korea sends some 30 to 40 students to study in Brazil.”

The Brazilian Embassy said around 450 Korean students have studied in Brazil in the last four years.

Many attending the seminar on Saturday were in fact once participants of such exchange programs to Brazil and were looking to return to the country for more than a cultural and educational exchange.

“I’ve just returned three days ago from a year of studying in Brazil,” said Park Seong-beom, a senior at the Hankuk University of Foreign Studies’ Seoul Campus in Dongdaemun District, eastern Seoul. “I was at Curitiba of Parana for a year, and now am looking for more opportunities to return to Brazil or anywhere in Central and South America for internships or jobs.”

“I studied in Brasiilia, then did an internship in Manaus in 2014, and then returned to Brasiilia in 2016 to do another internship,” said Kim Eun-jae, a graduate of the Hankuk University of Foreign Studies’ Yongin Campus in Gyeonggi. “I am now looking to return to the country for another internship or for graduate studies.”

The executive secretary of Kobras recommended the students find a niche in the market of Brazil.

“You must search for opportunities in Brazil with a wider perspective,” Kim said in addressing the room packed with college students and graduates. “You must train yourselves in areas that Brazil is looking to develop further, which are infrastructure, electronics, aeronautics, and especially skills in semiconductor production.”

The Brazilian Ambassador also encouraged the students to seize the chance to study in the country.

“I have seen Korean businessmen have a hard time recruiting Koreans who can speak Portuguese,” said Ambassador Luis Fernando Serra.

“Once you speak Portuguese, you will have opportunities to work at various Korean companies in Brazil, and once you find out for yourselves the potential of the Brazilian market, you will truly become assets between the two worlds who can understand the minds and needs of Brazilian consumers.

“I tell you, seize this opportunity when you can.”