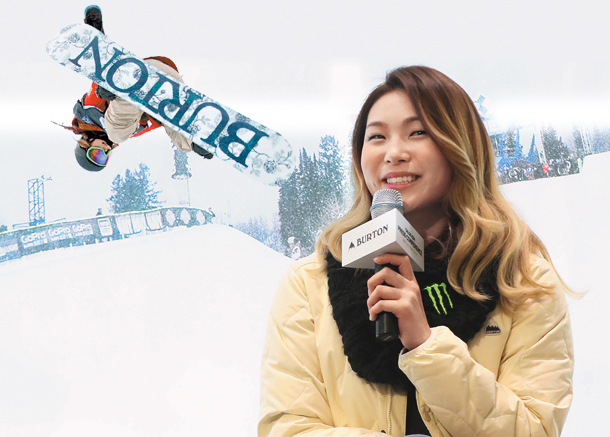 Chloe Kim, a Korean-American snowboarder, talks during her press conference at a snowboarding goods shop in Seoul on Tuesday. [YONHAP]

Chloe Kim, a Korean-American snowboarding phenom, said Tuesday she is looking forward to the 2018 PyeongChang Winter Olympics because it’ll be “special” for her to compete in her parents’ land.

Kim, 16, is in Korea as a sports envoy for the U.S. State Department and to compete at a test event for the PyeongChang Games. She will participate in various promotional events, including a snowboarding workshop for youth, before the International Ski Federation (FIS) Snowboarding World Cup in PyeongChang, Gangwon, some 180 kilometers (112 miles) east of Seoul, this weekend.

Kim said it’s going to be very exciting to make her Winter Olympics debut next year in Korea, should she qualify for the quadrennial competition.

“I think [the PyeongChang Games are] going to be a little more special than other competitions for me,” she said at a press conference at her sponsor’s flagship store in Seoul. “I’m sure all my families will be here to support me, so it’s going to be very exciting.”

A first-generation Korean-American from La Palma, California, Kim is a snowboarding prodigy, having won more than 10 international competitions already. She won three gold medals in superpipe events at the Winter X-Games and was a double gold medalist at the 2016 Winter Youth Olympic Games.

Last year at the U.S. Snowboarding Grand Prix, she became the first woman to land back-to-back 1080 spins in a snowboarding competition.

Kim, who started snowboarding when she was 4, would have been a medal contender at the 2014 Sochi Winter Olympics, but she was too young to compete. When asked about the PyeongChang Olympics, Kim said she will first have to clinch the national team spot but is excited to go through the qualification process.

“I’m preparing for the Olympics the same as other competitions,” she said. “I try not to push myself ... just to have the same mindset as always.”

Kim said she knows scoring is different between competitions like the X-Games and the World Cup, but she is always ready to show her best. The snowboarder added she always has three plans before performing moves in the air.

“It’s always interesting to think what I have to do,” she said. “For my runs, I usually just practice and see how that goes.”

Kim said she always tries to make the “right decision,” to avoid injuries and have fun when snowboarding.

“It’s about making the right decisions and being smart,” she said. “Not doing something crazy, but crazy enough to keep you safe.”

Kim, who is the first snowboarder to serve as the flag bearer for the U.S. at the Youth Olympic Games, said she likes to go shopping when coming to her parents’ land. The snowboarder said she doesn’t feel “strange” to be here because she has already experienced Korean culture in Koreatown, Los Angeles.

“I eat Korean food with my mom a lot in Koreatown,” she said. “You know, there’s lots of Koreans in Los Angeles.”

Just like other teens, Kim also likes to listen to K-pop, mentioning idol bands like Girls’ Generation and Super Junior. But the snowboard prodigy said she doesn’t have many friends in Los Angeles, since she is often away from the town to practice snowboarding.

“I don’t know what I would be doing right now If I wasn’t snowboarding,” she said. “Probably, just go to school and have a normal life.”

When asked about her rivals, Kim said that the only rival is herself.

“I don’t look at people as rivals,” she said. “Just beating myself and just doing my best is my challenge.”

Although she is building her way to become the top snowboarder of her generation, Kim said there’s still more to learn.

“I still have lots of things to learn as a person and as a snowboarder,” she said. “I just want to learn more.”