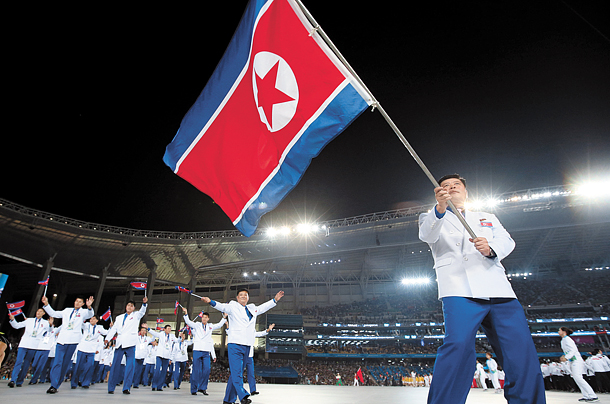 A flag bearer for North Korea waves the nation’s flag during the 2014 Incheon Asian Games. Earning the entry into the Asian Winter Games in Sapporo, Japan, the North may also attend the 2018 PyeongChang Olympics. [YONHAP]

As Japan allows entry to North Korean athletes to compete in the 2017 Asian Winter Games in Sapporo, North Korea also may seek for an entry into South Korea to participate in the 2018 PyeongChang Winter Olympics.

Since North Korea pushed forward its agenda to accumulate nuclear power, a sanction that bans its nationals from entering other countries has been imposed. Still, in December 2016, North Korea applied to compete in the Sapporo Winter Asian Games in three categories: men’s speed skating, short track skating and men & women’s figure skating, and Tokyo eventually approved their entry to Sapporo, according to local media sources in Japan, including the Kyodo News.

With Japan making an exception, the PyeongChang Organizing Committee for the 2018 Winter Olympic & Paralympic Winter (Pocog) and the South Korean government may also open its doors to North Korean athletes to compete during the Olympics.

But to be considered, the athletes first have to be qualified to compete in the Winter Games. Jung Jun-hee, a spokesperson from the Ministry of Unification, said their entry will be evaluated based on international practices. Jung added that the government would have no reason to prevent North Korean athletes to compete in the Winter Olympics representing their home country if they earn an entry into the Games.

Since he came to assume the power, Kim Jong-un has shown great interest in developing the country’s sports programs. In 2016, the country aired the 2016 U-23 Asian Football Championship (AFC) quarterfinal match between North Korea and Qatar and created its own sports television channel. It also has intention to create a nation-wide football program to rear young talent. When it comes to winter sports, North Korea has constructed Masikryong Ski Resort in Kangwon for the public to use in 2014. The country also reportedly built ice rinks in Pyongyang.

While it still is in the air whether North Korea will participate in the Olympics next year, there are some signs of improvement on relations between the North and the South when it comes to sports activities. In April, South Korean women’s football team will be visiting Pyongyang to play the 2018 AFC women’s Asian Cup qualifying round against North Korea.