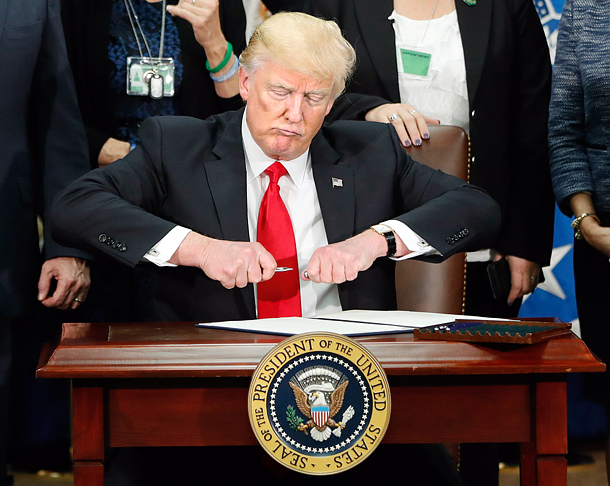 I couldn’t help myself from letting out a groan when my turn finally came at the immigration desk at Washington Dulles International Airport. I had been waiting in the queue for foreigners for nearly an hour after landing. “What’s taking so long?” I protested to my immigration officer.

“Is this all because of Trump’s anti-immigration order?”

The officer glanced at my passport and said curtly, “A journalist? Don’t ask me, ask Trump.”

His sarcastic tone echoed many other Americans witnessing the first two tumultuous weeks under the unorthodox and pugnacious president.

Americans have been both astonished and bewildered. In just a fortnight, Donald J. Trump signed 22 executive orders and met with 18 foreign leaders and 10 corporate chiefs. Trump is turning out to be an extraordinary president from the sheer dizzying pace and amount of work he has done already. But that feeling is quite different from how Trump is being portrayed by the traditional media, including CNN.

A Gallup poll over the weekend shows the average American sentiment. About 35 percent of the poll’s respondents said Trump was doing his job at a pace that was “about right.” Another 10 percent thought he could move faster. The other 47 percent believed he was moving “too fast.” The combined response neatly corresponds with the popular vote in the last election — 46.1 percent for Trump and 48.2 percent for Clinton. Clinton’s supporters still hate Trump while those who voted for Trump are firmly behind him. As long he has the support of nearly half of Americans, Trump would hardly care about international protests or restraining orders by federal district courts on his travel ban on Muslims.

What influences Americans most is the economy. Domestic demand accounts for more than 70 percent of the gross domestic product of the U.S. The country is the biggest importer of global products, getting 12.5 percent of its imports from China, 13.2 percent from Canada, 13.1 percent from Mexico, 5.8 percent from Japan, 5.5 percent from Germany and 3.2 percent from Korea. Americans spent billions to consume imported products and that was one of the reasons they saw many jobs move to distant lands. The central bank’s balance sheet is in a mess due to the record quantitative easing since the 2008 global financial meltdown. That is why Americans condone the bullying ways of Trump to get companies and trading countries to agree to increase hiring in the U.S. even though the demands are obviously unreasonable, unlawful and undignified.

This poses a conundrum to foreign leaders. When Barack Obama was president, he dined with Japanese Prime Minister Shinzo Abe in a famed sushi bar in the Ginza district in Tokyo to discuss the Trans-Pacific Partnership deal in April 2014. Obama went straight to the topic of business. He commented that he had seen not a single GM or Ford car on his way from his hotel to the restaurant whereas American roads were filled with Toyotas and Hondas. Abe did not flinch. “Have you not seen many BMWs and Benzs on the road? They make cars with steering wheels on the right side and try to meet the safety standards of Japan,” Abe retorted.

But even Abe is ready to yield to the tougher ways of Trump. He is flying to Washington Friday with a generous investment plan from Toyota. He is said to be considering shifting his attention to bilateral trade and forgetting the multilateral TPP that Trump disapproves of.

What he fears is not Trump, but the frustration and anger of Americans supporting the protectionist policy of their president. Abe has reorganized his trade team to prepare for lengthy negotiations with Washington.

Trump’s trade agenda sets targets according to the amount of their imports. It has first attacked China, then Canada and Mexico under the North American Free Trade Agreement, Japan, and Germany. Next on the list would be South Korea. The offensive will soon reach Korea. But there is no one to command our trade strategy. We have no one to answer back if American authorities complain of not seeing any Cadillacs on the roads of Seoul and Busan.