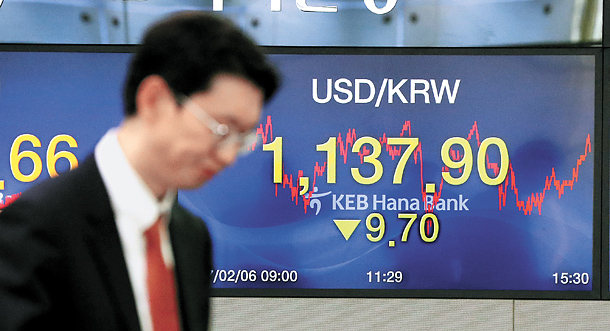 An electronic stock board shows the won falling against the dollar on Monday. On Tuesday, it closed at 1,144.3 against the greenback after depreciating 6.4 won compared to the previous day. [YONHAP]

The Korean won is subject to volatility again due to U.S. President Donald Trump’s” America First” trade policies, that have been heightening tensions with other global economies.

The won closed at 1,144.3 against the greenback Tuesday after depreciating 6.4 won compared to the previous day. However, the Korean currency has recently been appreciating faster than any others this year. When compared to the end of last year, when it was 1,208.5, the won has appreciated 5.6 percent.

This is sharper than the yen’s appreciation of 4 percent during the same period. The only economy that has seen its currency appreciate more than the Korean won was Australia’s at 6 percent.

This is a sharp turnaround from earlier this year when think tanks, including global institutions, projected the won to hover around 1,200 won and weaken to as much as 1,300 won per dollar by the second quarter. 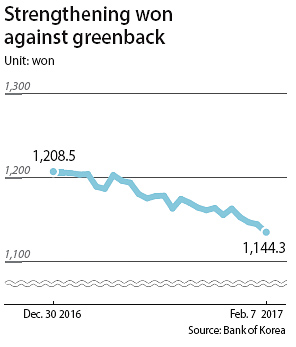 The recent change started after Trump, in a meeting with pharmaceutical executives this month accused China, Germany and Japan of manipulating the currencies to take advantage of trade.

“You look at what China is doing and what Japan has done over the years, and they played the money market and the devaluation market and we sit there like a bunch of dummies,” he said.

The appreciation of the won is a major concern, especially for exporters, as it weakens Korean goods price competitiveness by raising the price tag of goods sold on dollar figures.

In fact, Samsung Electronics is estimated to have lost roughly 300 billion won in the second quarter of last year due to the appreciation of the won while enjoying better-than-expected returns in the fourth quarter thanks to the depreciation of the Korean currency against the greenback.

The current trend is expected to continue for the foreseeable future as there are growing speculations that the U.S. Federal Reserve is likely to hold back on more interest rate hikes.

When the won value appreciates 10 won against the U.S. dollar, the Korean automotive industry’s revenue shrinks roughly 420 billion won, according to a Hyundai Motor researcher center.

“As there are speculations that the Fed is unlikely to hurry in raising the interest rates, the dollar value continues to weaken,” said Ha Kun-hyung, an economist at Shinhan Investment Corporation. “If so, sometime this month the won value could rise as much as 1,120 won against the greenback.”

Some brokerage firms even predict the won to appreciate as low as 1,100 won. The won on Monday has weakened to the 1,130 won level, the first time in three month.

Analysts say that the turning point will be when the U.S. Treasury Department releases its FX report in April.

“The appreciation of emerging markets’ currency, including the won, will likely to remain strong in the short term due to the currency manipulation issue raised by the Trump administration,” said Park Hee-chan, a Mirae Asset Daewoo analyst.

The recent political uncertainties in Europe have also created risks for the Korean foreign exchange market. The euro recently has weakened against the U.S. dollar at roughly 1 percent since the end of last year.

The impact of the appreciating won has been felt on the market, as the stocks of major exporters, including Samsung Electronics and Hyundai Motor, have weakened while those whose businesses are centered on the domestic market have been rising.