Quixote-inspired trek turns writer into a chef : Novelist Cheon Un-yeong discovered a passion for Spanish cuisine and has opened a restaurant

Quixote-inspired trek turns writer into a chef : Novelist Cheon Un-yeong discovered a passion for Spanish cuisine and has opened a restaurant

Top: Korean novelist Cheon Un-yeong opened a Spanish restaurant after being inspired by foods that appear in “Don Quixote.” Middle: One of the places she explored is the La Mancha region, where the 1605 novel is set. Using Google Maps, she learned about dishes that have been made for over 400 years. Above: She explored the country for months to cook and she learned from the locals of various regions of the country. Seen here is Cheon learning to cook migas in Toledo. [JEON HO-SEONG, CHEON UN-YEONG]

“An olla of rather more beef than mutton, a salad on most nights, scraps on Saturdays, lentils on Fridays, and a pigeon or so extra on Sundays, made away with three-quarters of his income,” the first chapter of the book reads.

Korean novelist Cheon Un-yeong was staying in Malaga, Spain, in 2013 as part of a residency program. The 46-year-old was re-reading Don Quixote, which she first read when she was young and she became curious about the Saturday dish enjoyed by Don Quixote.

“In Spanish, it was written as ‘duelos y quebrantos’ which roughly translates as ‘duels and losses’ or ‘pain and suffering,’” she said. “I got curious and found out that it was the pork-based menu that the heathens, who did not eat pork, were forced to eat in order to avoid persecution by Spanish Christians under the so-called pure blood principle. They ate with tears in their eyes.”

She was amazed by how much history - a sad one - is in the mere name of a dish. As she kept reading, she realized that Don Quixote is a story about eating.

It describes in details what Don Quixote and Sancho Panza eat on their adventures; what kind of food was served at the banquet of a nobleman through which the writer introduces the times and the types of people living the era.

“It appeared to me that all of the foods that appear in the novel were the codes and the keys of understanding Don Quixote,” she said.

Cheon spent a year making the list of the dishes that appear in the novel and traveled across Spain to find them. That led to the opening of La Mesa del Quixote, a Spanish restaurant in Yeonnam-dong, western Seoul. Cheon is the owner and head chef of the restaurant.

Finding dishes from 400 years ago was a challenge. Using Google Maps, she drew up a list of all of the restaurants in the La Mancha region, went to their websites to comb through their menus. From there, she went to Zaragoza, and then to Barcelona and back to La Mancha.

She returned to Spain last year multiple times to learn how to cook Spanish cuisine. There were times when she cooked more than 100 dishes with the locals in a market in Madrid. At other times, she participated as an assistant to a teacher at a cooking class for foreign tourists.

“Before, I thought writing a novel was the hardest thing in life, but I learned being a chef is much harder,” she said in a recent interview with JoongAng Sunday conducted last month in her restaurant.

Here is an excerpt from the interview with Cheon about her mother, her fascination with Spain and challenges of running a restaurant and more.

Q. Were you a good cook [before you learned to cook Spanish cuisine]?

A. I wouldn’t say I was a good cook, but I always loved cooking for people. When I was young, my father ran a factory. My mother cooked for the 20 to 30 employees there for ten years. She is from Suncheon, South Jeolla [known for good food] and she was a terrific cook. Even years later, some people would come, saying they came for my mother’s stew. Since elementary school, I was an assistant to my mother and earned pocket money for the work I did. When I was in college, I would invite my friends to my room and cook noodles. After I debuted as a novelist, I would serve fermented skate to my acquaintances.

You fermented skate on your own?

That’s what my family did all the time. Also I feel at ease the most when I am working on ingredients [for cooking]. For instance, when I experience writer’s block, I would remove excrement from anchovies or pound on blowfish. Right after I opened my restaurant, my friend sent me what I wrote after winning at an annual spring literary contest. My writing began “I wanted to be a cook.” I had totally forgotten about that. I thought maybe it was my destiny after all.

Still it wouldn’t have been an easy decision to open a restaurant. Was there a moment that cemented your determination?

After I came back from my six-month residency program in Spain, my dog that I had lived with for 15 years died. A day before it passed away, it seemed like it was in pain. I made a fried egg and mixed it with rice. The dog ate it all. After it died, I was in my room not being able to do anything. But then I thought, “at least it enjoyed the food I cooked,” and that was somewhat comforting to know. I guess that’s when I made up my mind to open a restaurant. 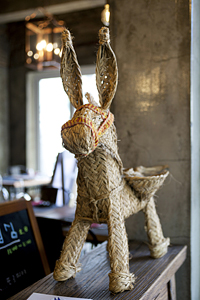 Cheon is getting support from the literary community, as seen from this straw donkey, a gift from cartoonst Chon Kye-young.

What’s so charming about Spanish food?

First of all, it’s cooked in a way that the ingredient’s original flavor is kept intact. Unless it’s necessary, it’s never over-cooked. Also, to the Spanish people, cooking is sharing. It’s just like how Koreans, in their difficult days, would cook gukbap [rice in soup] in a gigantic pot and share with all the neighbors. Spanish people also cook large quantities and share with neighbors. When I was learning to cook at a market in Madrid, whenever the class finished my teacher would pack me so much food. On my way home, I would share the food with the homeless.

The menu in your restaurant appears to be different from the usual menus we see at Spanish restaurants.

I added to the menu orange salad with cod and mussels with sherry wine that the Spanish people enjoy. Korean people are familiar with paella when it comes to the Spanish food, but I didn’t add it to the menu. In order to make a good broth to make paella, you bake ingredients like chicken, onions and bell pepper and boil for about 10 hours. You can use seasoning instead but I didn’t want to [fake] it.

Is there a dish from Don Quixote?

Not exactly, but a slightly altered item. A dish that uses bacon from the novel has been changed to use eggs. I also plan on introducing the lentil dish that’s in the novel soon.

I hear a lot of your friends from the literary community are helping out. Tell us about that.

Yes. [Novelists] Eun Hee-kyung, Pyun Hye-young and Kim Yeon-su are the biggest help. The donkey made of straw that guards the restaurant at the door is a gift from [cartoonist] Chon Kye-young. She got it from Spain. [Novelist] Yoon Sung-hee always tells me that she will wash dishes. She actually does that whenever she comes. In fact, many literary figures that I haven’t been able to keep in touch with visit. I am so happy I can serve them a meal.

Do you have any plans for a new novel?

For now, I am occupied [with the restaurant]. But I am publishing two books on Spanish culture and food. They are essays. I have embarked on an adventure like Don Quixote and I don’t know where the adventure will take me. When I go home after work at night, there are times when there are ideas in my head and I want to write.

When such desires add up to the point where it’s about to explode, maybe something will come out. When I come up with something amidst this adventure outside of the literary scene, maybe it will be something really meaningful.