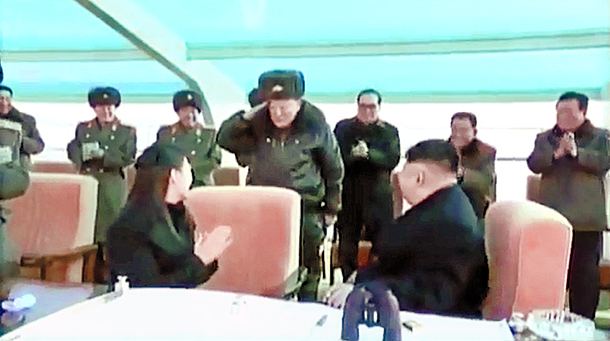 The military documentary, issued late last month by the Korean Central Television, Pyongyang’s state-run broadcaster, suggests Kim was trying to indoctrinate the public once again because it was a “very rare scene” for such a highly revered figure to salute Ri on state media, even if she is de facto first lady of the communist regime, according to local pundits.

For decades under the rule of Kim Il Sung and Kim Jong-il, North Korean partisans enjoyed exceptional status. The state praised them as “revolutionary martyrs” in media and bestowed upon them elite titles.

But in the Kim Jong-un era, things are shaking up.

Thae Yong-ho, former minister of the North Korean Embassy in London who defected to South Korea last summer, recently told officials in the Presidential Committee for Unification Preparation that Kim was purging the partisans’ descendants, who also hold great power in Pyongyang’s inner circle, because he was “fearful” of their influence. One chief reason why they come off as a potent threat to Kim is because they “know very well the dynamics of a power struggle,” said Thae.

“North Korea is a land of propaganda,” said Chin Hee-gwan, a professor of unification studies at Inje University, “which cautiously picks what to feature on national television, like their leader’s facial expressions or who he’s shaking hands with.”

Showing Ri Sol-ju being saluted is a “message” that the Kim Jong-un regime was stable, Prof. Chin added.

A local government source said Kim dreads the partisans and their offspring due to his own lack of honorable lineage. Although Pyongyang never made any official announcements on who his mother was, Ko Yong-hui has been mentioned as the strongest candidate so far, the third wife of Kim Jong-il. She never appeared at any public events in the North and died in Paris in 2004 at the age of 52 of suspected breast cancer.

Analysts claim Kim Jong-un has been trying to hide his traces to her because her father was born on Jeju Island and later went to Osaka, Japan, to work at a factory producing military apparel for Japanese soldiers. Korean-Japanese have low social standing in the North.