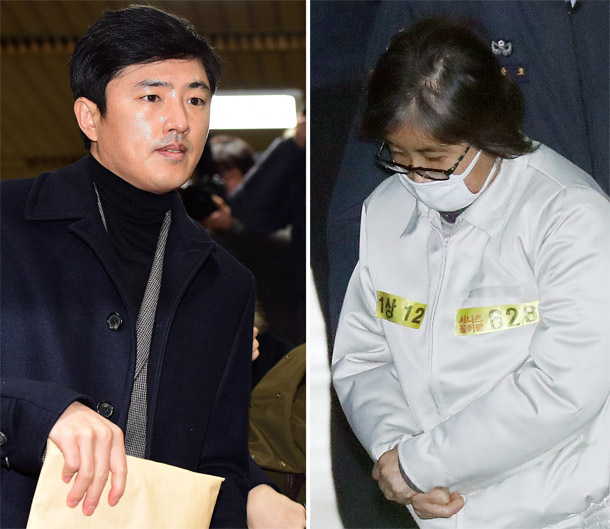 Choi Soon-sil’s former business associate Ko Young-tae testified at Choi’s trial on Monday, standing face-to-face for the first time since the scandal broke with the woman at the center of the abuse of power controversy that has led to the president’s impeachment.

Ko was one of the crucial figures when the scandal broke with his statement to JTBC in October, “What Choi loves most is editing the president’s speeches.”

Monday was the first time that Ko testified at court, as he had repeatedly declined to submit to summons from the Constitutional Court, where President Park Geun-hye’s trial is ongoing.

Ko testified as a witness at the Seoul Central District Court that Choi frequented the Blue House and often complained to him how tiring it was to make constant visits to President Park. He recalled Choi making various decisions on state matters and numerous phone calls to a presidential aide asking for documents from the Blue House.

“I have witnessed many times the encounters that Choi had with the president,” Ko told the court on Monday, during the trial on Choi and An Chong-bum, former senior secretary for policy coordination. Choi and An were indicted in November on charges of coercing conglomerates to pay massive donations to two foundations controlled by Choi.

He added, “Every time I dropped Choi off, she would complain, saying ‘I am so tired but I have to go into the Blue House,’ or ‘I have to go because the president is calling for me.’”

Ko told the court that “Choi spoke to the president face-to-face” and that she would get one-on-one meetings with the president.

As for Choi’s relations to Jeong Ho-seong, the former personal secretary of Park, who was indicted for leaking state secrets to Choi, Ko said, “Choi spoke with Jeong numerous times over the phone.”

“Choi would tell Jeong to do this a certain way or do that a certain way,” Ko said, “and say things like ‘send it over to me right now’ in phone calls with him.”

After his testimony to the court, Choi lashed out at Ko, accusing him of having a criminal history concerning drug consumption and of being a delinquent credit borrower.

“When you were changing your name, you had troubles because your name carried a criminal record of drug consumption,” Choi spoke directly to Ko via a mic at the court. “And your credit was so bad you couldn’t have normal financial transactions. You must admit this because I was the one who introduced you to someone at lawyer Lee Kyung-jae’s office to take care of this matter.”

Ko denied both accusations. He also denied accusations concerning an alleged romantic affair between him and Choi.

“President Park’s lawyers have brought up a point at the Constitutional Court that the spark of the scandal was a love affair gone wrong between Choi and Ko,” Choi’s lawyer Lee said.

“I am shocked that the lawyers would say something like that at such a sacred place like the Constitutional Court,” Ko replied. “It is a poor attempt to assassinate my character.”

Lee then questioned Ko whether he didn’t call Choi a stupid-head.

“Didn’t you say to Choi, ‘Isn’t it heavy to carry around such a dull head like yours?’” Lee asked.

To this, Ko replied, “That’s not what I told Choi, it’s what Choi told me,” at which point Choi glared at Ko.

After answering questions for more than eight hours, Ko exited the court without answering reporters’ questions, including one on why he declined to submit to the summons from the Constitutional Court.