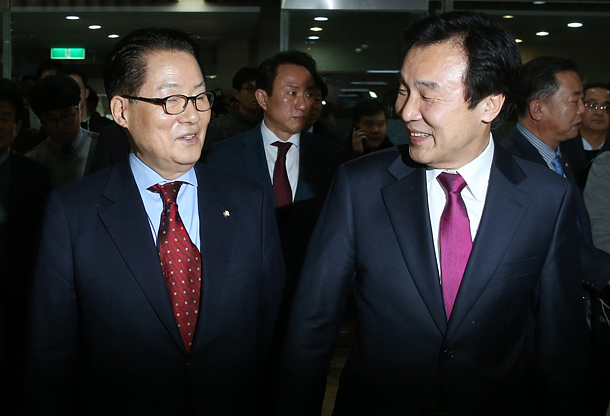 Former Democratic Party Chairman Sohn Hak-kyu, right, talks with People’s Party Chairman Park Jie-won, left, as they walk to the press center in the National Assembly on Tuesday after agreeing to the merger of Sohn’s nascent political group, the Reform Council for People’s Rights, with the People’s Party. [JOINT PRESS CORPS]

Former Democratic Party Chairman Sohn Hak-kyu joined the People’s Party on Tuesday in his last attempt at the presidency at a time when his support has fallen into the single digits.

Sohn, who led the Democratic Party (DP) in 2008 as its chairman, declared the merger between his nascent political group, the Reform Council for People’s Rights, and the People’s Party. While it took the shape of the merger, it is practically Sohn’s entry into the party in order for him to take part in the primary process to become its nominee, a process that requires him to defeat heavyweight Ahn Cheol-soo.

“Today I declare the merger between the reform council and the People’s Party to build a Korea that is great and anew by bringing together all political forces for the constitutional amendment,” said the 70-year-old politician. Sohn, a well-known critic of Moon Jae-in of the DP, harshly criticized the DP that he had once commanded, likening its leadership to an interest group only going after power in a reference to Moon’s supporters.

Sohn’s decision to join the People’s Party came as he has been struggling to raise his profile among voters amid an unprecedented abuse of power scandal that has led to President Park Geun-hye’s impeachment. Public support for the former Gyeonggi governor has remained low with no foreseeable way for him to bounce back.

By joining the People’s Party, he now faces an uphill battle with Rep. Ahn Cheol-soo, who proclaimed earlier that this year’s election will be between himself and Moon.

To run in the race, Sohn returned to politics last October after his retirement in 2014, when he was defeated in a by-election. Since his return, he has been a strong advocate for a constitutional amendment before the election so an incoming president can start a term under new political settings.

But with the Choi scandal upending the political establishment, the former political science professor has been struggling to make himself appealing to voters with his strong message for revising the constitution being sidelined by the public’s growing demand for a judgement call on the Park administration.

In the latest polls by Realmeter, conducted from Wednesday through Friday, Sohn came in seventh with 2.3 percent of support on this year’s presidential election.