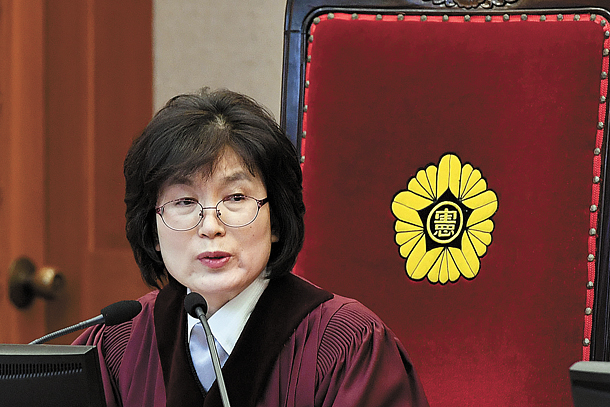 Lee Jung-mi, acting chief justice of the Constitutional Court, presides over a hearing in the trial over the impeachment of President Park Geun-hye on Tuesday. [JOINT PRESS CORPS]

The Constitutional Court Tuesday scheduled additional hearings for the coming weeks in the impeachment trial of President Park Geun-hye, effectively slamming the door on a ruling this month.

The National Assembly impeached President Park in December for having allowed a secret inner circle, including longtime friend Choi Soon-sil, to interfere in state affairs. It also accused her of failing to protect citizens’ lives during the Sewol ferry’s sinking in 2014.

The Constitutional Court must decide whether to remove Park from office by June 6, 2017. Judges have promised a speedy trial and speculation was running high that a ruling could come at the end of this month.

If the court decides to remove Park, a presidential by-election will take place in two months.

The court decided Tuesday that Kim Ki-choon, former presidential chief of staff, will be summoned for questioning Feb. 20. Kim was scheduled to attend a hearing on Tuesday, but was absent for health reasons.

It also scheduled a hearing Feb. 22 to listen to testimony from Choi and An Chong-bum, former senior presidential secretary for policy coordination. Choi and An are currently undergoing criminal trials after being indicted in November on charges of coercing conglomerates to make massive donations to Park’s pet projects controlled by Choi in collusion with the president. The court heard testimony from them already but is calling them again at the request of Park’s lawyers.

With hearings being held through Feb. 22, it becomes nearly impossible for a ruling to be delivered by the end of this month. After hearings end, the judges will hold conferences and conduct a vote on a verdict. Then more time will be needed to draft a ruling, review and confirm it.

That process took two weeks in the impeachment trial of the late President Roh Moo-hyun in 2004 for breach of political neutrality before a general election. Roh was impeached on March 12, 2004 and the Constitutional Court held hearings through April 30, 2004. The court ruled on May 14 to reject the impeachment motion. It remains to be seen if the court will make a ruling in early March, before another vacancy will be created on the nine-member bench. As of now, the court is operated by eight judges after Chief Justice Park Han-chul’s tenure expired on Jan. 31, 2017. Acting chief Lee Jung-mi will retire on March 13, 2017.

Before his retirement, Park made a rare and forceful comment that the court must rule on the president’s fate before Justice Lee’s term ends. According to the Constitutional Court Act’s Article 23, seven or more justices are required to attend an impeachment trial. A vote of six or more justices is required for an impeachment, the article says.

If the hearings and deliberations end before Lee’s retirement date, Lee will still be allowed to vote on a ruling. The ruling, therefore, will be made by eight judges.

If the court decides to remove Park and if the ruling comes out before the independent counsel ends its current probe against her, she will likely face an investigation under detention. The probe is currently scheduled to end at the end of this month, and the team plans to ask for a one-month extension.

During the previous hearing, Park’s lawyers asked the court to admit 17 additional witnesses. The National Assembly’s impeachment committee, which acts as the prosecution in the trial, called the move a stalling tactic.

After the 11th hearing on Tuesday, the court decided to accept eight of the witnesses. Among the rejected witnesses were heads of conglomerates, including Samsung Electronics Vice Chairman Lee Jae-yong.

The National Assembly said Park’s lawyers were demanding too many witnesses. “If the witnesses do not attend the scheduled hearings, the court must cancel their selection for the sake of a speedy trial,” Rep. Kweon Seong-dong, head of the impeachment committee, said.

“I also had the same thought,” Acting Chief Justice Lee said. “The judges will discuss it and tell our decision at the next hearing.”

Lee Joong-hwan, one of Park’s lawyers, said the defense tried its best to keep the number to a minimum. “We have no plan to request additional witnesses, but things may change if there is a new situation,” he said.