Students thrive by charting their own courses

Students thrive by charting their own courses 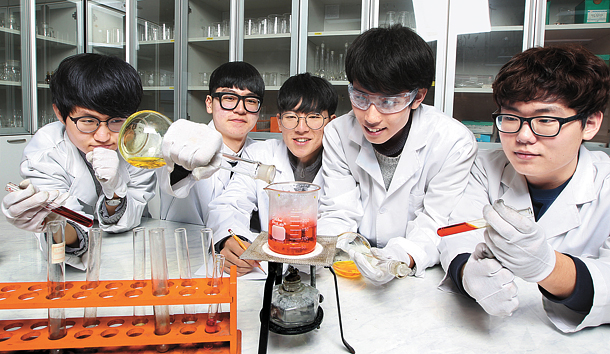 Nineteen-year-old Lee Yeong-hyeon, a student at Daeyoung High School in Yeongju, North Gyeongsang, enrolled in an independent studies course last year. A budding botanist, Lee chose to examine the cultivation of Venus flytraps. Lee procured three pots of Venus flytraps and observed them as they grew while adjusting the light, temperature and water. “I became more interested in classes after being able to see and experiment on Venus flytraps in person through the independent study course,” said Lee.

A classmate of Lee, Koo Bon-jae, 19, was next door for advanced physics with students from Youngju Girls High School, and Yeonggwang Girls High School. Daeyoung High is the only school to administer joint-education courses. Students can request a class for a joint-education course, provided a minimum of five students from three schools express interest.

Currently, there are 26 college level courses offered, such as international economics, applied mathematics and Anglo-American literature. “When calculating the speed of an object in textbooks, they don’t consider frictional resistance, however in this class, we calculate even the air resistance,” Lee said. “Discussing and finding a system of measurement with students from other schools without a teacher’s help will always remain in my mind.”

The small high school with a student-body of 335 students (110 in the 12th grade) is being carefully observed. Since 2012, Daeyoung High School has had three to five students admitted to Seoul National University (SNU) yearly.

Daeyoung High sent five students this year - Lee Yeong-han, Koo Bon-jae, Shin Seung-gyo, Oh Chan-yeong and Kim Sang-hee. There were more admitted to other prestigious schools such as two for Korea University, one for Sungkyunkwan University, three for Korean military academies and 15 for Kyungpook National University.

Comparing the number of students admitted to SNU from 119 regular high schools in North Gyeongsang, except for specialized language and science schools, Daeyoung High and Gyeongju High School are tied for first place. With Gyeongju High being over double the size of the student body of Daeyoung High’s 335, the smaller school really punches above its weight. After changing to an academic high school in 1987, Daeyoung High has had a total of 157 students admitted to SNU. What could be the secret behind this countryside school with university admissions that would make high schools in Gangnam District, southern Seoul, envious?

Owing to the Ministry of Education’s designation of Daeyoung High as a science-centered high school in 2010, classes focusing on experimental research were introduced and in 2015 offered an accelerated curriculum. The accelerated curriculum was six courses - advanced mathematics I and II, humanity’s future society, independent study, liberal arts & science and integrated science. Though these courses were formally decided by the Ministry of Education, other high schools generally do not select them due to the emphasis on college entrance exams.

“In order to apply the accelerated curriculum,” said Lee Ji-heum, principal of Daeyoung High, “[the school] has over 200 more hours of class time in a term compared to other high schools.

Classes in art, music, or physical education are paired with other academic offerings. For example, students in a Korean language class took a literature tour and in a science course, an astronomy camp was held. Of course, the courses all follow the guidelines of the Ministry of Education.

“[Daeyoung High] is an exemplary case where students think, reason and participate on their own volition in raising their academic ability,” said Kang Hyeon-suk, professor at the Department of Education at Kyungpook University, “Rather than the style of sending a minority elite of students to prestigious universities, focusing on just the admission rate, the Daeyoung High model is far more appropriate.”