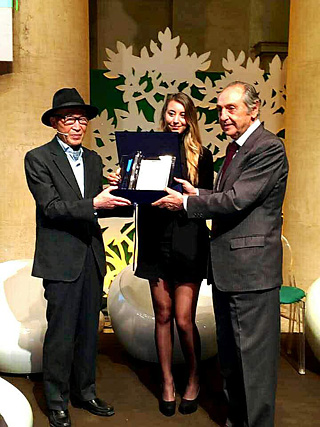 Poet Ko Un receives an award from Italy-based Fondazione Roma. This marks the first time that a poet from Asia was given the award presented at the foundation’s “Ritratti di Poesia” international poetry festival. [SUWON CITY]

“I think there is a sense of innocence in one’s attitude toward honor. I am feeling that joy of a five-year-old now.”

Poet Ko Un made this rather poetic remark upon receiving an award from Italy-based Fondazione Roma earlier this month.

He also shared the challenges of being a poet at the award ceremony held on Feb. 3 at the Temple of Hadrian.

“I am on my 60th year of writing poetry,” the 84-year-old said. “I am now able to know whether poetry is the work of ghosts or the work of the air. However I am nowhere close to defining what poetry is. The more I become a poet, the less I know about poetry - just like one knows so little about what his or her back looks like.”

Ko has already received several international awards like the Cikada Prize, a Swedish literary prize for East Asian poets, in 2006, and the Griffin Poetry Prize Lifetime Recognition Award from Canada in 2008.

But the latest award is meaningful in several ways.

The foundation, a leading cultural institution in Italy, has hosted the international poetry festival since 2006 and the highlight of the festival is the awards given to poets from around the world every year.

The awards were established in 2014 and Ko is the fourth recipient.

Previous laureates include Carol Ann Duffy of the UK, Jacobo Cortines of Spain and Adam Zagajewski of Poland. Ko is the first Asian recipient of the award.

Organizers of the festival introduced Ko saying that “the Korean poet sings of life and the universe based on sophisticated sensitivity and the trajectory of his own powerful life experiences.”

Ko’s work has gained traction worldwide since 2000 and Italy is no exception. Three of his collections of poetry have been translated into Italian. Early in 2013, he was invited to give several special lectures at the Ca’ Foscari University of Venice, Italy, where he was given an honorary fellowship. He also received the literature award from the 2014 NordSud International Prize for Literature and Science.

“In ancient Italy, a day began at sunset,” he told the JoongAng Ilbo over the phone. “That’s why the award ceremony took place at 6 in the evening. With this tradition and its legacy, I began my brand new day as a recipient [of the award].”

“My poetry was born in the Korean language and endured one challenge after another,” he said. “Now, my mother tongue is not the sign of nationality, but a dialect of the universe. One day, when poetry perishes on this planet, the poetry will revive in dark matter in the universe. I am going somewhere.”

Ko finished his remarks by reading one of his poems about the life of a wandering butterfly that roughly translates as below.