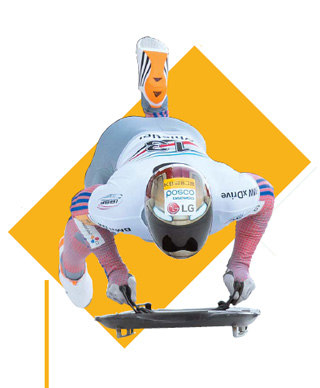 "All or nothing” is a motto that drives Korean skeleton racer Yun Sung-bin these days. Currently ranked second in the world according to the standings by the International Bobsleigh and Skeleton Federation (IBSF), the 22-year-old racer is in his sixth year as a professional winter sport athlete and fifth bearing the Korean flag on his chest.

Yun gained a reputation as an athlete to watch for when he became the first Korean to finish first at an international competition in 2014 in Whistler, Canada. After finishing 16th at his first Winter Games at Sochi in the same year, Yun now looks to go where no Korean skeleton racer has gone before - the top of an Olympic podium - and he plans to do it at the Alpensia Sliding Centre in Pyeongchang, Gangwon, some 400 kilometers (249 miles) north of his birthplace, Jinju, South Gyeongsang.

“My eyes are fixed on PyeongChang and a gold medal from the 2018 Olympics,” said Yun. “I will show what I am made of.”

And recent results bode well for the young racer. After clinching gold at the BMW IBSF World Cup at Whistler in December, which was the second in his career, Yun has yet to finish below fifth place in every IBSF World Cup event he’s raced.

The most recent success came when Yun finished third in Igls, Austria, on Feb. 3 with a time of one minute and 44.57 seconds. He was just 0.68 seconds behind the gold medalist of the event, Martins Dukurs of Latvia.

Yun was ranked first in the world until recently, when his Latvian rival brought him down. Dukurs is something of a legend when it comes to the skeleton race. Throughout his decorated career, which began nearly two decades ago in 1998, he has won 47 World Cup titles.

But even in the face of the legend, Yun did not shy away from doing his best. In the seven competitions in which the two racers clashed this season, Yun outperformed Dukurs on three occasions.

After the IBSF World Championship in Germany later this month, Yun will face Dukurs in front of the home crowd during the BMW IBSF World Cup Bob & Skeleton in Pyeongchang, slated to start on March 17.

Still, as one of the top racers in the world now, Yun can expect fierce competition from other racers, who are eager to keep him from moving forward. “European or North American racers who never even spared him a thought before now look at Yun differently,” said Cho In-ho, the head coach of the Korean national skeleton team.