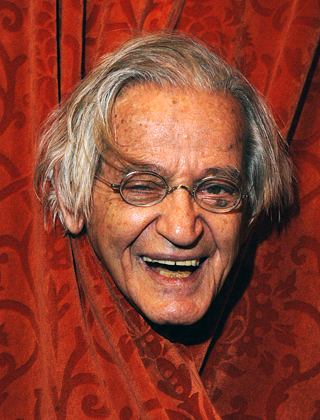 Irwin Corey, the wild-haired comedian and actor who was known for his nonsensical style and who billed himself as “The World’s Foremost Authority,” died Monday, at his home in Manhattan. He was 102. [AP/YONHAP]

NEW YORK - Irwin Corey, the wild-haired comedian and actor known for his improvisational riffs and nonsensical style who billed himself as “The World’s Foremost Authority,” died Monday at his home in Manhattan, according to his son, Richard. He was 102.

Corey’s dizzying mix of mock-intellectual circumlocutions, earnest political tirades and slapstick one-liners made Corey the king of comedic confusion and earned him the nickname “professor.”

“Did you hear about the guy who went to the druggist and wanted to get some cyanide?” one of his jokes went. “The guy takes a picture of his wife out of his wallet, and the druggist says, ‘I’m sorry, I didn’t know you had a prescription!’”

Corey became a staple on television talk shows and in comedy clubs, and his film career included working with Jackie Gleason and Woody Allen. He often wore sneakers, a skinny black tie, black tails and his hair was disheveled.

It was never clear exactly what he was an authority on. Often he would begin his act with long-winded gobbledygook filled with sentences that followed their own logic before pausing and then saying, “What was the question again?”

His son, Richard, on Tuesday called his father “original and one-of-a-kind, iconic.” Even in his grief he channeled his father by telling obituary writers that his father “died peacefully at his home, surrounded by his son.”

Corey was among a generation of comics who emerged in the 1950s and ‘60s who used their humor to question the status quo, a group that included Dick Gregory, who mocked racial attitudes, and Jerry Stiller and his wife, Anne Meara, who satirized assumptions about marriage. Corey punctured academic pretense, and his jokes also took on a political and social bite.

Born in the Brooklyn borough of New York, Corey lived in an orphanage until age 13. He said he got his start when he auditioned for a play in the 1930s with the soliloquy from “Hamlet.” The casting director laughed so hard, he eventually told him, “You should be a comedian.” He took his advice.

He got his first regular gig at the Village Vanguard, where he earned his nickname after an opening act that began with five minutes of nervous pantomime. The first word out of his mouth was, “However.”

After that, he had a whirlwind career that spanned several stints on Broadway (from “New Faces of 1943” to “Thieves” in 1974); in film (from “How to Commit Marriage” in 1969 to “Curse of the Jade Scorpion” in 2001); and on late-night television and in comedy clubs. He was last on Broadway in “Sly Fox” in 2004 opposite Eric Stoltz, Richard Dreyfuss and Elizabeth Berkley.

During the Democratic National Convention of 1956 he rode a float down Michigan Boulevard carrying a sign that read, “Professor Corey will run for any party, and he will bring his own bottle.” When Thomas Pynchon won the National Book Award for “Gravity’s Rainbow,” Corey accepted for the press-shy author in a bizarre, rambling speech that thanked “Richard Python.”

“His style is a deep philosophical statement: No one in fact is any more important than another,” his son told The New York Times in 2008. “He is constantly digressing from his own tangent, so he’s digressing from a digression.”

Corey stayed busy deep into the ‘90s, making appearances at comedy clubs and Friar’s club roasts. He denounced the war in Iraq and attended rallies supporting legalization of marijuana.

He also could be spotted pushing a walker in midtown Manhattan traffic, panhandling or selling free newspapers to motorists, with all the money raised going to charity.

A few months shy of his 90th birthday, Corey told the AP that he had no intention of hanging up his trademark rumpled suits and string tie any time soon. He called life, at any age, the “one miracle that happened in this galaxy.”

“Walking on water is a trick,” he said. “But life is a miracle.”