Retelling the oldest of tales proves a success

Retelling the oldest of tales proves a success 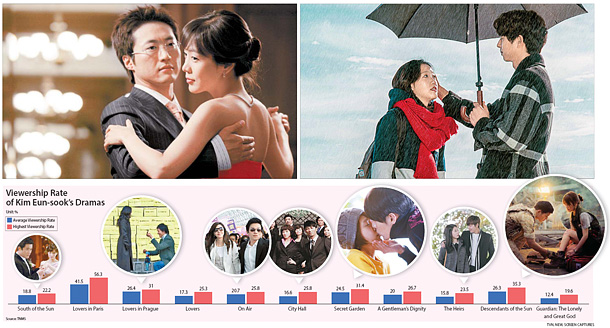 Kim Eun-sook is one of the most successful scriptwriters in Korea. Renowned for depicting Cinderella stories, a majority of Kim’s dramas have seen high ratings. Top left and right are “Lovers in Paris” and “Guardian: The Lonely and Great God.” [TVN, NEW, SCREEN CAPTURES]

One commonality found on the resumes of A-list Korean actors Hyun Bin, Lee Min-ho, Song Joong-ki and Gong Yoo is that they all have appeared in dramas written by star scriptwriter Kim Eun-sook. Quotable lines like “Since when have you been so pretty?” and “From now on, you only worry about me” melted the hearts of millions of viewers, and created a frenzy at home and abroad.

Known for stories centered around Prince Charming-like characters, Kim debuted with “South of the Sun” in 2003. She instantly rose to fame in 2004 with her second feature “Lovers in Paris,” which had an over 55 percent viewership rating at its peak, according to market research firm TNMS. Kim subsequently had hits with “Lovers in Prague” (2005), “Secret Garden” (2010-11), “A Gentleman’s Dignity” (2012) and “The Heirs” (2013), which all included a charming male lead to capture the hearts of viewers.

Though some may wonder whether Kim’s typically rich, handsome and smart male characters who always fall in love with a poor and ordinary female character would still be appealing today, with discussions about feminism and gender roles growing stronger, her most recent hit drama “Guardian: The Lonely and Great God” proved that the formula is tried and true.

The series, which wrapped late last month depicts the relationship between a hundreds-year old goblin, played by Gong Yoo, and a high school student, played by Kim Go-eun, became the most-watched tvN drama in its 11-year history with a striking 19.6 percent viewership rate at its highest. 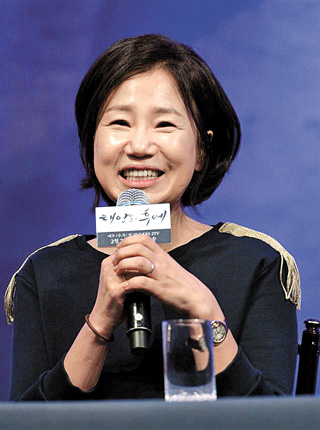 Last year’s “Descendants of the Sun,” which began Kim’s second career renaissance, slightly diverged thematically from her typical rich-male character archetype, which may be partly due to co-writer Kim Won-suk. It was a massive hit with a 35.3 percent viewership rate at its highest. This was a notable figure considering that viewers today mostly watch dramas via online streaming instead of TV.

“I’m a fan of Kim Eun-sook’s dramas,” said 24-year-old Han Ji-eun, who majored in Communications in university and writes drama scripts in her spare time. “I think she unfolds the story in minute details and delicately touches on an ideal world that people dream of. Instead of merely depicting a pretty fantasy, Kim also knows how to include humor [in the storyline,]” Han said and added, “I believe Kim’s Cinderella stories still work today because their audience grew up reading Cinderella fairy tales,” which is evidenced by the fact that the largest proportion of viewers for “Descendants of the Sun” and “Guardian” were females in their 40s, accounting for 29 and 19.2 percent respectively.

“I felt so uncomfortable while watching ‘Guardian.’ In fact, I think the actual Cinderella story would have been better. A high school student dating a hundreds-years old goblin and asking him for money was so weird. I stopped watching in the middle.”

The star writer Kim, dubbed a genius by some, agreed that there always appears a Cinderella in her work during an interview with the Korean TV & Radio Writers Association in 2011.

“Whether male or female, there is always a Cinderella in my work,” Kim said. “Cinderella is the most entertaining story. [I know this because] my non-Cinderella plots had low viewership rates. Drama is not an art, but an hour-long entertainment. I don’t believe I should try to do art with other people’s money.”

Despite plots that trigger strong feelings from some viewers, Kim’s dramas are strictly targeted for women, according to cultural critic Hwang Jin-mi, who added that Kim’s sophisticated description of characters makes audiences fall for her work.

“From afar, Kim Eun-sook’s dramas are Cinderella stories. However, if you look closely at the characters, the female characters are far from obedient. They are usually strong-minded despite their unfortunate family backgrounds or lack of finances. But they try to be independent and have high self-esteem, as seen by [Gil Ra-im] from ‘Secret Garden’ or [Ji Eun-tak] from ‘Guardian.’ While they are struggling to live their lives, a good-looking, wealthy, righteous man who claims to only love her appears. What women wouldn’t like that?”

Despite the unchanging Cinderella frame, Hwang said that Kim’s characters have developed over the years.

“Throughout the last decade, her series have gradually become more and more sophisticated. Her dramas used to only deal with simple issues like marriage. Yet, Kim began developing her characters by lacing them with more serious elements like getting employed and handling debt.”
Cultural critic Lee Taek-gwang also commented about the popularity of Kim’s dramas despite women’s growing independence.

Kim’s dramas revolve around a female character with her boyfriend as her subordinate, explained the professor at Kyung-hee University.
“Kim’s series always include fantasy elements like a goblin with supernatural powers and a good-looking, well-mannered male character innocently loving a female lead. [This kind of fantasy] is well-received by female viewers amid social uncertainties and a struggling economy because viewers feel compensated by dream-like stories, which rarely happen in reality.”