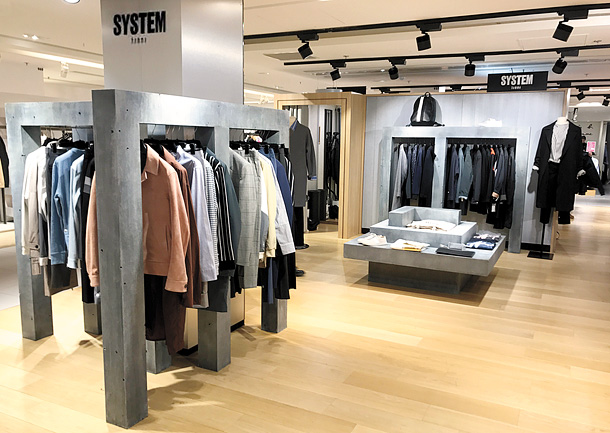 System Homme, a clothing brand by Hyundai Department Store fashion subsidiary Handsome, has opened its own shop in the upmarket Galeries Lafayette department store in Paris, a first for an Asian menswear brand. [HYUNDAI DEPARTMENT STORE]

Hyundai Department Store is making waves in the global market with its fashion subsidiary Handsome.

The company said Wednesday that its casual clothing brands System for women and System Homme for men will set up stores inside Galeries Lafayette, an upmarket department store in Paris.

System Homme will have a dedicated shop on the second floor of Lafayette’s homme building, which the company says is unprecedented for an Asian menswear brand. “It is very rare for a homegrown menswear brand that has not even participated in famous fashion shows to open its own shop in Lafayette,” a Hyundai Department Store spokesman said. “It didn’t even go through a preliminary process such as opening a pop-up store or being introduced in select shops.”

System for women will have a pop-up store on the second floor of the main building starting Friday that will last for one month. A spokesman said that if the pop-up receives a positive response, System could potentially get its own store as well. The brand is already being sold at a select shop, L’oeil Des Galeries, which accommodates brands like MM6 and The Kooples.

According to Handsome, System was one of the top three brands at the select shop in terms of sales.

Hyundai Department Store hopes to maintain its premium image in the global market as it did in its home turf. “Korean culture, which used to be represented by pop songs and food, has been consumed for quite some time,” a Hyundai Department Store spokesman said. “It is time for the trend to be transferred to fashion, and there are a few homegrown brands that can represent Korea.”

The System Homme shop will sit next to premium brands Sandro Homme, Zadig & Voltaire and COS. System will be positioned against Kenzo, Isabel Marant and Carvan, also known for their high price and quality.

Handsome expects shoppers to become more familiar with the brand after it completes an exterior show window at Lafayette on Saturday. It will be up for one month to coincide with Fall-Winter Paris Fashion Week.

“The first-floor show window has been long secured by luxury brands such as Louis Vuitton, Chanel and Hermes,” a Handsome spokesman said. “System and System Homme will come up with a way to curate the display window and logo to well represent their brand identity.”

Handsome has been aggressively expanding its overseas business this year. Both brands entered the Chinese market for the first time last month after signing an exclusive partnership with Chinese company Hangzhou Zhiheng Industrial last October.

It pledged to secure 50 retail channels in China and generate 150 billion won ($130.76 million) in total sales by 2020. It will start by opening 10 System and System Homme stores in Hangzhou, and then expand to Beijing and Shanghai within this year.

“This year will be a turning point for Handsome to go global,” the company said in a statement. “To compete with foreign apparel brands, Handsome is going to fortify its brand competitiveness and identity through continuous material and design innovation.”