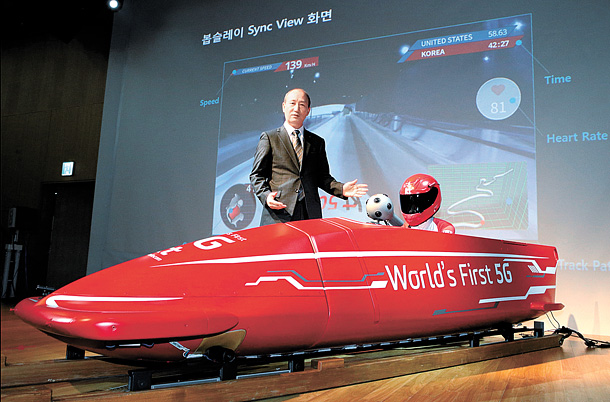 KT says it will introduce the world’s first trial service of 5G networking at the 2018 PyeongChang Winter Olympics. [KT]

KT, a major Korean telecommunications provider, is bringing its high-speed live broadcasting services based on the 5G network to the PyeongChang Winter Olympics, which will significantly change the way people experience the Games.

Previously, live broadcasts of bobsleigh races, for example, were limited to views outside the track because the wireless environment had to adjust to the sled’s rapid speed, which can go up to 95 miles per hour.

KT has developed a wireless data transmission technology suitable for a high-speed environment. It has standardized and redesigned the technology to maximize the transmission rate of radio waves. Last October, it was able to transmit live video from a bobsleigh race at the Alpensia Sliding Center in Pyeongchang County, Gangwon, by mounting a small wireless camera to the sled.

By using the company’s Sync View, the audience can watch bobsleigh races from the athlete’s perspective instead of from outside the track as in previous Olympics.
KT is also introducing Time Slice and 360° VR, which both allow spectators to watch sports games from various perspectives.
Time Slice presents a series of photos that show an athlete’s performance from different angles using 100 cameras. In 360° VR, spectators can watch virtual-reality video of moments like athletes entering the stadium and awaiting their results. Viewers will be able to choose the video’s perspective from inside the stadium and watch live broadcasts from any point.

Winter sports are often fast-paced and held in tracks or on rinks, making them a challenge to broadcast. With these new technologies based on the high-speed 5G network, KT believes it will be able to provide the audience with a more realistic and enjoyable experience of the Games.
KT has installed an upgraded version of its 5G test network for the Hello PyeongChang Test Event, which runs through April 2017. It plans to complete the 5G test network by September 2017.

In February 2018, the company will introduce 5G service that combines information technology and sports, which the company calls Realistic Media Services. KT is discussing a way to apply it to the Games with the International Olympic Committee and PyeongChang Organizing Committee.

After the Games, KT plans to further develop core technologies for the 5G network and apply the standard used in the PyeongChang Olympics to 5G standards for major national groups.

“Korea’s 5G is now at the starting line,” said Oh Sung-mok, KT's network division vice president. “5G requires KT, producers of chips and devices and government institutions to cooperate. Our company will do its upmost best to use the PyeongChang Winter Olympics as momentum to form a 5G ecosystem centered in Korea.”

KT cooperated with global producers of communications tools and devices to establish a standard for 5G, forming a test network around busy parts of Seoul. The company completed a successful field test in December.