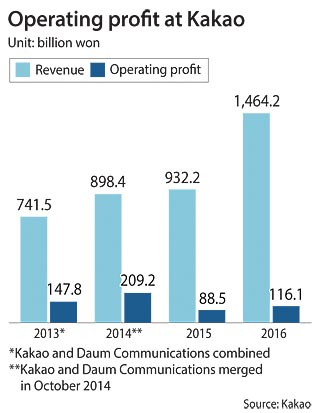 Mobile and online games such as Friends Popcorn and Black Desert as well as its music download and streaming app MelOn were the biggest contributors to the revenue. The content business sector produced 701.8 billion won in revenue in 2016, jumping 156.5 percent from a year earlier and capturing 47.9 percent of the entire revenue pie.

Sales of Kakao Friends character-related products - from dolls to stationery - and gifticons, or mobile gifts exchanged over KakaoTalk, were 228.3 billion won, skyrocketing 294.6 percent year on year. However, revenue from advertising shrank 11.1 percent on year to 533.9 billion won, which Kakao explained comes from the fact it voluntarily scrapped “low-efficiency” advertising products last year. It expects to rebound in the sector in 2017, the company added.

Kakao invested aggressively in on-demand services that connect offline services online, such as taxi hailing and designated drivers, last year, but already has given up some services like Kakao Hairshop due to complicated regulations and low profitability.

“Kakao shrank its on-demand services in the latter half of 2016 and shifted its focus to advertising,” said Oh Dong-hwan, an analyst with Samsung Securities. “The company is expected to beef up mobile advertising by introducing new advertising tools and revising its Daum portal site in 2017.”

Just two days after Kakao officially announced a launch of a subsidiary that specializes in artificial intelligence, Kakao Brain, on Feb. 1, its CEO Jimmy Rim made a fresh announcement during the conference call Thursday morning. He said KakaoTalk will upgrade into a “versatile” shopping platform this year by forging additional partnerships with online retail sites through an existing in-app tool called “Plus Friend.”

“We will begin letting users do grocery shopping and order food over KakaoTalk,” he told investors and analysts. The vendors will total around 20 brands, from chicken to pizza and burger restaurants.

“KakaoTalk will evolve to meet everyday life demand for users so you do anything right away through it.”