Lotte looks to U.S. to boost sales of 3 drinks

Lotte looks to U.S. to boost sales of 3 drinks 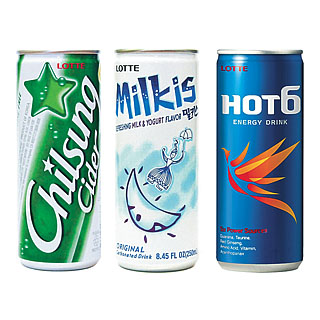 The Korean energy drink Hot 6 will take on Red Bull and Monster in the American market from this month.

Lotte Chilsung Beverage said Thursday, it will start selling the caffeinated drink from this month in the U.S., starting in on the West Coast.

The company said it has already shipped 2,000 boxes of 30 units each.

Korea’s energy drink industry saw a boom in the early part of this decade and became a 100 billion won ($87.3 million) market. Pioneers Red Bull from Austria and California-based Monster were followed by the launch of Hot 6, which sells for a cheaper price.

But growth has stalled in recent years with the number of health-conscious consumers rising in Korea. Health authorities have also warned the public not to drink too many caffeinated drinks.

According to industry sources, the energy drink market in Korea has slipped to 70 billion won and Hot 6 has a 60 percent market share.

Its U.S. marketing will begin at the Genesis Open 2017 PGA golf tournament in California, which will be held from Feb. 13 to 19.

Lotte Chilsung Beverage said it will introduce the drink with the slogan “Brand New No. 1 Korean Energy Drink” and emphasize its natural caffeine extracted from guarana.

Lotte’s global ambition will continue by expanding U.S. retail sales of its Milkis and Chilsung Cider soft drinks. Milkis was introduced in 1989 and has loyal customers fond of its unique, yogurt-like flavor. Chilsung Cider was a pioneer in Korea’s soft drink industry when it was launched in 1950.

Until now, Milkis, a white opaque fizzy drink, and Chilsung Cider, a Korean version of Sprite, have been only available online or in small retailers and Korean markets in the United States.

“There are five flavors of Milkis being sold in Korea, including strawberry and melon. If the local response is good, the possibility of launching different flavors in the U.S. also exists,” the company spokesman said.

The company said two of its drinks will be retailed at 2,000 branches of Kroger, the No. 1 supermarket chain in the U.S., from March.

“Lotte Chilsung Beverage aims to create a ‘Hallyu beverage’ in the U.S. by expanding retail channels to appeal not only Koreans but Americans as well. Hot 6, Chilsung Cider and Milkis will be at the forefront,” the beverage subsidiary said in a statement.

Lotte Chilsung Beverage’s foray into the U.S. is part of the group’s effort to expand beyond Asia. To become more global, Lotte Group has been holding the LPGA Tour Lotte Championship in Hawaii since 2012 and acquired the New York Palace Hotel located in Manhattan in 2015, renaming it the Lotte New York Palace Hotel.