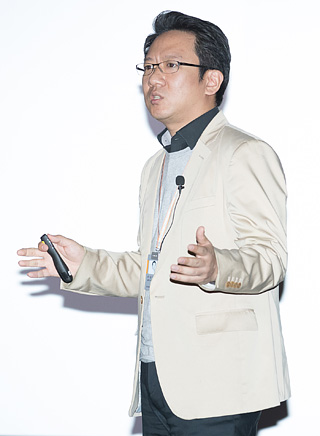 Lee Seung-won from the CGV Research Center explains the rising trends in the Korean film industry during a press conference on Wednesday. [CJ CGV]

An increased number of middle-aged and older viewers flocked to theaters last year, making up a growing portion of moviegoers, said Lee Seung-won from the CGV Research Center on Wednesday. The trend may have movie promoters rethinking the ways they market their films in the future.

“Middle-aged and senior moviegoers (45 and older) took up 5.3 percent of the entire audience [with CGV memberships] in 2007. They became one of the major audience groups as the figure jumped to 20.3 percent in 2016 from 10.1 percent in 2010,” Lee said during an industry forum held by the country’s biggest multi-screen cinema chain CJ CGV.

According to Lee, middle-aged and senior moviegoers accounted for approximately 20.9 percent of ticket sales of Korea’s first zombie movie “Train to Busan,” which was the only film to hit the 10 million mark last year.

“Moviegoers over 45 were especially sensitive to online reviews, word of mouth, the director and [box office] rankings,” said Lee. “They are more influenced by traditional media like TV commercials, film-related TV programs and portal sites than social media.”

Older moviegoers were also found to prefer familiar franchises or foreign blockbusters, as the five top-grossing movies for middle-aged audiences last year were “London Has Fallen,” “Ben-Hur,” “Rogue One: A Star Wars Story,” “Jason Bourne” and “The Revenant.”

Families with children purchased an average 2.8 tickets per visit, and took up 10.5 percent of the entire ticket sales last year. Ticket buyers between 35 and 44 often bought tickets for both themselves and their children.

The number of people who watch the same film multiple times in theaters has also seen a jump. Approximately 58,000 people watched the same film three times or more in CGV theaters last year.

Repeat moviegoers cited supporting their favorite actors, a desire to understand the hidden meanings of the film and enjoying the background music as reasons why they returned to see films more than once.

“Korea moviegoers in their 20s and 30s are still the major consumers leading the local film market,” said Lee.

“Older audiences, moviegoers with children and those who watch the same movie several times [in theaters] have risen significantly, and they should be considered when promoting films.”