North-South stories hit big screens : With increase of curiosity, studios embrace characters from both sides of the border

North-South stories hit big screens : With increase of curiosity, studios embrace characters from both sides of the border 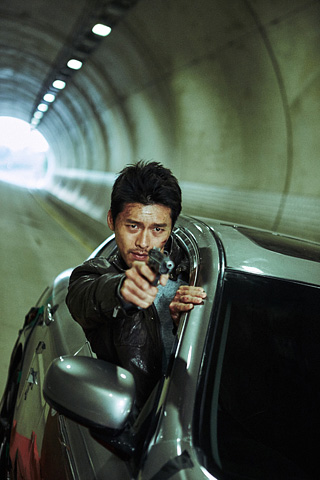 The North Korean detective in “Confidential Assignment,” played by Hyun Bin, is depicted as a stronger and more handsome detective than that of the South. [CJ ENTERTAINMENT]

While a number of disaster films including “Tunnel” and “Train to Busan” were box office hits last year, a new trend has emerged as a number of movies featuring North Korean characters are hitting theaters this year. Starting with box office hit “Confidential Assignment,” a string of films involving North Korea are scheduled for release this year.

CJ Entertainment’s “Confidential Assignment” depicts South and North Korean detectives working together to investigate a crime. It has become the highest-selling film so far this year with 6.4 million tickets sold as of Wednesday since it hit theaters nationwide on Jan. 18. CJ is slated to distribute another film tentatively titled “Scheme” that involves North Korea. The film, helmed by Yoon Jong-bin of “Nameless Gangster: Rules of Time” (2012) and starring actor Hwang Jung-min, began filming late last month. Taking place in the mid-‘90s, the film will depict a South Korean spy crossing over to the North to find out the truth behind the country’s nuclear developments.

Filmmaker Yang Woo-seok of “The Attorney” (2013) is returning with “Steel Rain” for his second feature, starring actor Jung Woo-sung. Adapted from his webtoon of the same title, the film will follow the leader of North Korea, who loses power after a military coup and is forced to cross over to the South with a North Korean agent. This NEW-distributed flick kicked off production last week, and is expected to wrap up filming in the first half of the year. The original story unfolds as the former North Korean leader Kim Jong-il dies and a coup rises. Though the film has long been in discussions, it was indefinitely delayed after Kim passed away in 2011.

Another film on the list is “V.I.P.” Directed by Park Hoon-jung of “New World” (2013) and featuring actor Jang Dong-gun, the film started shooting in October and wrapped up late last month. Though a specific release date has yet to be confirmed, the Warner Brothers Korea movie is expected to hit theaters in the first half of this year. The story unfolds as a high level official from the North is suspected to be a serial killer in the South. Different people, including a South Korean cop, a National Intelligence Service agent and a North Korean spy all work to be the first to catch the suspect.

Following the popularity of the recent box office hit “Confidential Assignment,” a number of North Korea-themed movies are in production or are slated for release this year, including “Steel Rain” and “V.I.P.” [CJ ENTERTAINMENT, NEW, WARNER BROTHERS KOREA ]

Filmmaker Baek Jong-yeol of “Beauty Inside” (2015) is also set to begin production on the upcoming film “413.” Distributed by Showbox, the title comes from the date that Korea’s provisional government, built by independence activists in Shanghai, was founded in 1919. It fictionally depicts how the South Korean president worked to save the South and North with an agent. The film will be shot in five cities, including New York, where the biggest action scenes will take place.

The reasons behind the recent flood of North Korea-themed movies are rooted in people’s curiosity towards the mysterious land, according to culture critic Oh Dong-jin.

“Curiosity in what North Korean life is like right now and interest in what kind of chemistry would be created if South and North confront each other is [how North Korea-themed movies are born]. Diverse elements like corruption, dictatorship and spy agents are all sources of curiosity. This is similar to the production of espionage films based on the Cold War during that era.”

Oh added that, “The movies illustrate screenwriters’ ambitions to ease the relationship of the South and North culturally if it can’t be resolved politically. So, instead of showing North Koreans as monsters, they are depicted to be very similar to us with slight differences.”