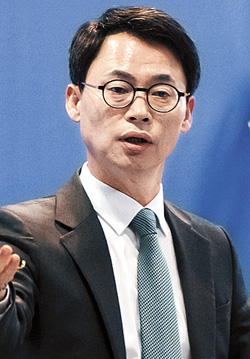 Independent counsel Park Young-soo declared war against President Park Geun-hye Thursday after she refused to be questioned about the corruption and abuse of power scandal that led to her impeachment.

He vowed that the president will be questioned eventually.

“After one media outlet reported Tuesday about the timing and location, a lawyer of the president unilaterally notified the independent counsel that she will reject the face-to-face questioning scheduled for [Thursday],” Lee said. “As of now, no specifics have been decided on any future scheduling. The independent counsel’s basic stance that we need to question her remains unchanged.”

After the SBS network reported Tuesday evening that Park would be questioned within the Blue House on Thursday, presidential aides loudly complained that the independent counsel leaked information and threatened to boycott the questioning.

Although the independent counsel’s team reacted with extreme caution on Wednesday, its attitude was dialed up on Thursday. Lee made clear that the independent counsel made many concessions to arrange the questioning but Park failed to respect the agreement by blaming the team for the leak, which it did not make.

The suggestion was that the leak may have come from the Blue House itself and used as an excuse to back out of the questioning. 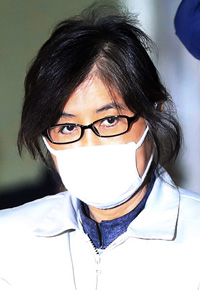 Choi Soon-sil is taken to the independent counsel team for questioning on Thursday. [YONHAP]

The independent counsel probe is scheduled to end on Feb. 28. It can seek a 30-day extension, but that requires the permission of the president. Since Park was impeached by the National Assembly in December, Prime Minister Hwang has served as acting president while she undergoes trial in the Constitutional Court. An extension is up to Hwang.

On Wednesday, heads of three liberal opposition parties, which together control a majority in the National Assembly, urged Hwang to extend the probe.

“For a face-to-face questioning of the president, we had a number of advance contacts with her lawyers for some time,” Lee said Thursday. “During the negotiations, we accepted most of her demands including the time, location and method because she is an incumbent president and there is a security protection issue.

“Although Article 12 of the Special Prosecutor Act allows us to make public the questioning schedule, we also agreed to keep it secret until the session was complete and then release the information simultaneously” with the president’s lawyers, he said.

If it takes place, it will be the first face-to-face questioning of an incumbent president in a criminal investigation in Korean history. Lee, however, admitted that the independent counsel has no legal power to force the questioning.

Lee also hinted that the independent counsel will rule out a new confidentiality agreement to arrange Park’s questioning. “I cannot say specifically whether we can keep it secret or not, but we will avoid all possible contentious aspects in the future negotiation,” he said.

While the president remained elusive, the longtime friend who is at the heart of the scandal, Choi Soon-sil, appeared for questioning by the independent counsel Thursday. But she said nothing.

In the past, Choi, currently undergoing her own criminal trial, refused to cooperate with the independent counsel’s summons. The team had to obtain court warrants to compel her to come in for questioning. She voluntarily showed up on Thursday.

Choi, however, appeared to have a hidden motive. “We had expectations because she said she wanted to come, but she is not talking,” Lee said. “She is more interested in the independent counsel’s questions.”

Observers said Choi’s change in attitude may have been intended to scope out the investigators’ strategy ahead of the questioning of the president.

Park’s predicament also deepened at her impeachment trial at the Constitutional Court on Thursday, as the judges expressed irritation at her lawyers’ apparent stalling tactics. The judges made nine requests on Thursday to Park’s lawyers and the National Assembly’s impeachment committee, which acts as the prosecution in the trial, to proceed “more speedily.”

Her lawyers have asked for new witnesses and managed to schedule more hearings until Feb. 22, 2017. After the court allowed more hearings, speculation grew this week that the judges could strike down the impeachment.

Acting Chief Justice Lee Jung-mi actively intervened in Park’s lawyers’ questioning of a witness on Thursday. The hearing was the 12th of its kind. Lee said the lawyers were asking overlapping questions and they must proceed with more efficiency. She also said the questions were unclear or trivial.

Justice Kang Il-won, presiding judge of the trial, also stopped Park’s lawyers from asking unnecessary questions. He even pointed out that with some of the questions the lawyers were acting against their client’s interests.