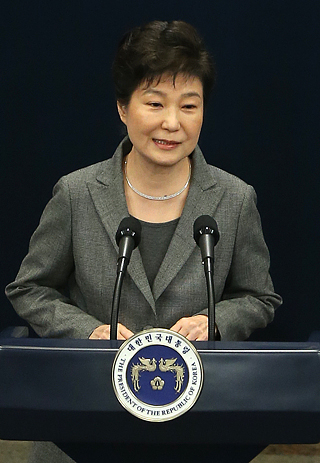 President Park Geun-hye refuses to answer a question from a reporter after she read her third statement to the public on the abuse of power scandal on Nov. 29, 2016. [JOINT PRESS CORPS]

The following are President Park Geun-hye’s thoughts inferred from speculation spreading among politicians and law professionals.


I am completely innocent. I did not do anything wrong, but why do I have to go through the impeachment? Fortunately, the impeachment will eventually be struck down. I can guarantee it.

This is my scenario. Justices of the Constitutional Court are the judges who spent their entire lives on making judgments on legal principle. Among the 13 grounds the National Assembly cited for my impeachment, the only thing that was confirmed is that I had shown Choi Soon-sil a few speech drafts. Many judges at the court probably think they cannot uphold the impeachment, a de facto death penalty to an incumbent president. Of the seven judges, I can only convince two. Kim Chang-jong, a judge from Daegu and North Gyeongsang, my political home ground, or Justices Seo Ki-seog and Cho Yong-ho, the conservative judges I appointed, will buy my argument. I can send my aides from the legal community and persuade them to “Think about this country’s future with the consciousness of a judge,” and they will be convinced. If two of the three are persuaded, it will be a success.

I will soon declare that I will testify in court. Sometime in early March, immediately before Justice Lee Jung-mi’s retirement on March 13, will be appropriate. The court will have no justification to reject. It will have to delay the timetable to conclude the trial before March 13. And that will give me the advantage.

With Lee’s retirement, there will be seven judges on the bench and two judges that I convince will refuse to uphold the impeachment.

Then, I will be cleared, because the court will not meet the requirement of six judges to finalize the impeachment.

Of course, the angry mob will continue to protest fiercely. But they cannot enter the Blue House and bring me down. Moon Jae-in once said, “Revolution is the only option if the impeachment is dismissed,” and then the public fiercely condemned him. Lee Jae-myung, a more progressive contender, said he will respond within the order of law if the impeachment is struck down. An Hee-jung also said so. The opposition party is protecting me on its own, so there is no need for me to worry.

Of course, I have no intention to complete my term, even if the impeachment is dismissed, because of the disgraceful scandal. Before returning to my job, I will declare that I will respect the promise I made in November of last year that I will step down early if the National Assembly appoints a bipartisan prime minister.

By giving the people the gift of an early end to my presidency, I will clear all the charges against me and receive the guarantee for my safety after retirement. I will, of course, secure all the special treatments for a former president, including the 12 million won ($10,430) monthly pension, three aides and one driver. After I step down, I will enjoy the assistance of my remaining aides and secure my position as the godmother of the conservatives and politicians from Daegu and North Gyeongbuk to find an opportunity in the future. The conservative rallies have shown that more than 15 percent of the people are still supporting me. Including shy supporters, that number will come to about 30 percent. I feel confident about that.

The opposition parties, which have enjoyed the sweet dream of winning the next election with the belief that I will be impeached in early March, will panic. They will start a war against each other after I ask them to nominate a bipartisan prime minister. Moon will just demand my resignation without any alternative, and An, Ahn Cheol-soo, Sohn Hak-kyu and Yoo Seong-min will say they must accept my proposal. Nothing pleases me more than the division of my enemies.

The media, opposition parties and protesters had long underestimated me, the conservatives, Daegu and North Gyeongsang political powers and the judges who benefit from us. We are not that simple. Based on my scenario, the next election will take place around the summertime. No matter who will become the next president, he or she will have to suffer to resolve the aftermath of the impeachment turmoil. It doesn’t matter if Moon wins. A better world actually waits for me and my supporters. We can call our opposition pro-North, and we will naturally regain our control over the conservatives. We just have to follow through with my plan without any hesitation.