Reform is only breakthrough

Reform is only breakthrough 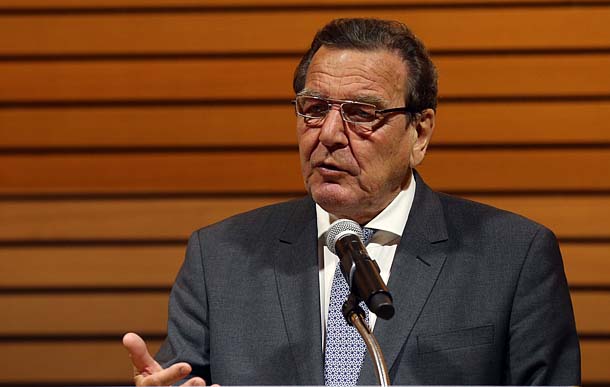 Former German Chancellor Gerhard Schroder, famous for the Agenda 2010 reform program, gave a lecture in Seoul on May 21, 2015. [JOONGANG ILBO]

The government estimates this year’s economic growth at 2.6 percent. I bet on a lower figure in the 1 percent range.

The housing construction sector kept up domestic demand last year and the economy grew at an estimated pace of 2.7 percent, but that too cannot be relied on this year. Other factors behind growth – consumer and corporate spending and external demand — will likely be worse than last year. Moreover, confidence is at a low. Typically low confidence has become zero upon demoralizing influence-peddling scandal involving a friend of the president. Sentiment can save or kill an economy. The economy loses life and steam when feeding on skepticism. What we should fear most is waning hope of getting up again. We could find ourselves like Japan with an economy mired at zero or negative territory.

The solution has long been laid out. Structural reforms are the only breakthrough. All governments have talked reform. The outline is more or less than same regardless of the ideological front of the ruling power. Yet no headway has been made. Lack of will from the leadership should be blamed. Former German Chancellor Gerhard Schroder, famous for the Agenda 2010 reform program, said the outcome of reforms is usually evident after two to three years. Politicians usually cannot wait that long. They are also unpopular, as Schroder’s election loss demonstrates.

Few candidates for the next president have spoken of reforms. Some mention reforms, but do not seem genuine. What is more important than the agenda is the action plan on how the reforms are acted out. Instead of what, the next leader must specify how. The next president would have to go straight to work after the election as a transition period won’t be affordable due to the lengthy vacuum in leadership from the impeached predecessor. The candidates therefore should be better prepared so that the next president can immediately launch reform programs. Successful cases suggest the longer time left in the tenure, the greater odds become for reforms to succeed. The reform agenda of President Park Geun-hye flopped because the three-year restructuring outline came out in her second year in office. The candidates therefore should hurry in devising a reform action plan based on four major principles.

The agenda, first of all, must have a clear message. It must persuade the public that lives will become better after the measures are in place. Former Japanese Prime Minister Junichiro Koizumi was able to push ahead with five-year reform in 2001 under the slogan of New and Changed Japan. He pitched that an economic recovery is not possible without a structural makeover. Korean presidential candidates also must be able to deliver a strong message. They need to appeal to the public that the future hinges on structural reforms.

Then, the next leader must tap a reliable person to spearhead the reform campaign. Koizumi seated reform-minded economist Heizo Takenaka to head the Council on Economic and Fiscal Policy with full authority to redesign public policies on economic affairs. The presidential candidates should also start recruiting a reform minister. The public would believe the candidate to have a strong will if full authority is bestowed onto the reform czar.

Thirdly, the reform agenda must be swift and resolute. All reforms are painful. The longer they take, the greater the suffering. Yield and compromise is also necessary. The leader would have to give up trying to mediate in conflict of interests if they delay a reform agenda.

Timing is important for reforms. Schroder first formed a tripartite arbitrary committee for labor, management and government before launching labor-sector reform. But the meetings were time-consuming. He pushed ahead with Agenda 2010 despite strong protests from the ruling party. Koizumi went further. When his party disapproved of his reform plan, he went straight to the public. He promised to surrender all vested interests for reform. His reforms became resistance-free.

Lastly, the action plan must be meticulously worked out so that it can immediately take off with the start of the presidency. Koizumi named his administration a troop for reform operation. The first target became the rigid bureaucratic community. Without such show of will, reform cannot gain public support.


*The author, former editorial writer for the JoongAng Ilbo, is an adviser to the Korea Institute of Finance.