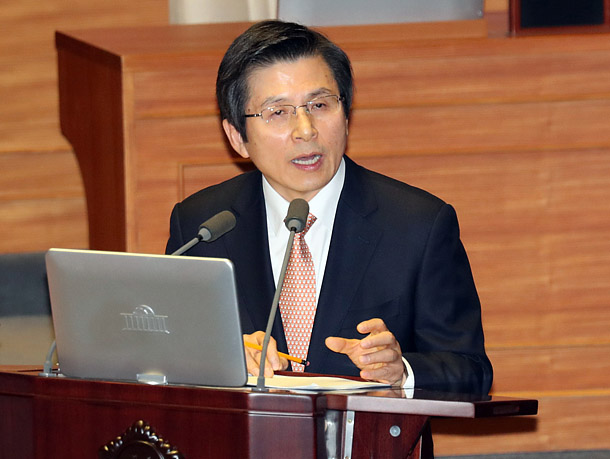 Prime Minister Hwang Kyo-ahn, acting president, refused to clarify his stance on the politically-charged issue of extending the special prosecutors’ corruption probe into President Park Geun-hye, saying it is not yet time to consider it.

Hwang made the remark during a parliamentary interpellation session amid growing calls from opposition parties to extend independent counsel Park Young-soo’s probe, which expires on Feb. 28. The investigation period can be extended once by a month, with Hwang’s consent.

“Currently, we are not in a situation where we have to consider an extension,” he said. “As you know, special prosecutors still have about 20 days left and that is a considerable amount of time.”

Hwang also pressured the special prosecutors to do their utmost to carry out the probe.

“If special prosecutors have already been thinking of an extension, it might mean that they are not thinking of working hard in the remaining 20 days,” Hwang said.

The main opposition Democratic Party, its splinter, the People’s Party, and the minor far-left Justice Party have collectively demanded that the acting president consent to the extension. Some opposition lawmakers have threatened to push for legislation to extend the probe.

The independent counsel team has said it is “positively” considering pursuing an extension. The team formally launched its 70-day probe on Dec. 21.

During the parliamentary session, Hwang also sidestepped the question about whether he is eyeing a presidential bid, reiterating that his priority for now is stabilizing state affairs, which have been hamstrung by the scandal.

“I have been doing my utmost to carry out duties that I have been entrusted with,” he said, “and I have no other thoughts on my mind.”

But Hwang actively responded when Rep. Lee Sang-don of the People’s Party asked about Hwang’s exemption from military duty.

“It’s a pity neither the president herself nor the prime minister served in the military,” Lee said, “even though the conservative government emphasizes national security.”

“I couldn’t serve because I was really sick,” Hwang replied. “You cannot say ‘then join the military and die.’”

Hwang was exempted from mandatory military service because of chronic hives in 1980.

Since former UN Secretary General Ban Ki-moon renounced his presidential ambitions on Feb. 1, Hwang has been touted as a potential standard-bearer of the conservative bloc for this year’s presidential election.

A poll conducted by local pollster Gallup Korea from Tuesday to Thursday found that Hwang ranked third with 11 percent support, trailing Moon Jae-in, a former leader of the Democratic Party, with 29 percent and South Chungcheong Gov. An Hee-jung with 19 percent.