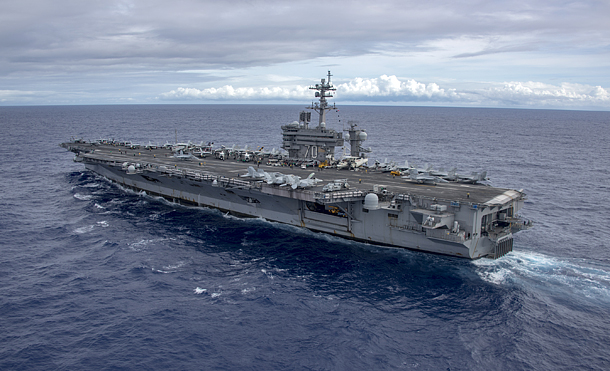 The aircraft carrier USS Carl Vinson (CVN 70) transits the Pacific Ocean. The aircraft carrier made a port call in Guam on Friday in what could be a preparation to take part in an annual joint military drill between Korea and the United States slated for March, a military source said. A possible mobilization of the aircraft carrier for the Key Resolve exercise is aimed at deterring North Korean nuclear and missile threats. [U.S. NAVY]

With President Donald Trump’s promise to “Make America Great Again,” the once-forgone U.S. defense strategy to build military capabilities to counter possible conflicts in two regions in the world is back on the table, especially in regard to American forces’ capacity to counter a possible conflict in Korea.

The Subcommittee on Readiness and Management Support of the U.S. Senate Committee on Armed Services on Wednesday local time discussed how ready U.S. forces are in countering a possible conflict in Korea while maintaining the current level of U.S. forces in other regions.

“I can tell you today we cannot do two things simultaneously. One of the stressing ones for us is Korea, we could not do that at all if we still had commitments elsewhere in the world - Europe, Africa or the Middle East,” said Gen. Glenn Walters, assistant commandant of the U.S. Marine Corps, at the subcommittee’s hearing. “And I think our enemies know that.”

Gen. Walters also testified at the hearing of House of Representatives’ Committee on Armed Services on Tuesday, where he raised similar concerns about the readiness of U.S. forces.

“We would be able to execute a Korea scenario, but we would have to draw from other commitments in the world to make it on the timeline required,” Gen. Walters said in response to a question from Rep. Trent Franks, a Republican from Arizona, on the feasibility of the U.S. forces to execute a “Korea scenario while maintaining commitments around the world,” or counter a possible conflict in Korea while maintaining the current level of U.S. troops elsewhere.

The recent hearings of the upper and lower houses are largely understood to be a signal from the American government on its strong resolve to counter military threats from the Kim Jong-un regime, especially as they follow discussions on the U.S. capabilities to preemptively strike a North Korean intercontinental ballistic missile at the Senate Committee on Foreign Relations last week.

“The U.S. government would need to check if its forces are ready to counter possible conflicts that may ensue from a preemptive strike,” said Cha Doo-hyun, visiting research fellow at Korea Institute for National Unification.

“A preemptive strike capability is credible only when the government has enough forces ready to engage successfully in a conflict that may ensue from a strike,” said Yang Uk, senior researcher at Korea Defense & Security Forum. “The fact that the U.S. Congress is holding these discussions is a signal to the North to not to conduct military provocations.”

The U.S. government’s defense strategy “to defeat an original adversary and deny another aggressor in another region,” in the words of Rep. Franks, was largely interpreted to have been forgone in the Barack Obama administration, when it pursued budget sequestration and large cuts in military spending in 2012.

The table has turned with the Donald Trump administration. Under the slogan “Making Our Military Strong Again,” the Trump administration seeks to “end the defense sequester and submit a new budget to Congress outlining a plan to rebuild our military,” according to its statement on the White House website.

It adds, “We will also develop a state-of-the-art missile defense system to protect against missile-based attacks from states like Iran and North Korea.”

U.S. Congress passed the annual National Defense Authorization Act in December, which seeks to spend a Pentagon budget of $619 billion.

“The Trump administration is ready to spend some $500 billion and more in the next 10 years, and this is having an effect on the U.S. policy on North Korea,” said Asan Institute for Policy Studies’ research fellow Go Myong-hyun.

“But I don’t think the Trump administration’s response should be read as the traditional defense strategy in building capabilities to counter possible conflicts in two regions in the world.

“It’s not about provoking a possible conflict, but about increasing to the max the capabilities of the U.S. armed forces to deter threats. And it is understood that both the Republicans and Democrats are on board when it comes to maximizing U.S. capabilities to counter threats from the North.”

The House Foreign Affairs Committee also held a hearing on Tuesday on countering the North Korean threat, questioning experts including Victor Cha, senior adviser and Korea chair at the Center for Strategic and International Studies, on the possible goals of North Korean leader Kim Jong-un and vulnerabilities of the regime.

Rex Tillerson, inaugurated last week as secretary of state, also affirmed the strong stance of the U.S. government against the North during his confirmation hearing in January.

“It is important that North Korea’s leadership have no doubt that the United States is prepared to use all elements of our national power to prevent it from posing a nuclear threat to our homeland,” he said in a written statement confirmed by a Foreign Relations Committee spokesman to be authentic, according to the Japan Times.