Daegu installed new sculptures in the streets of western Daegu, which were designed by Yi Je-seok to promote the prehistorical-remains park on Monday. Some 20 sculptures were put near lamp posts and street signs in a variety of poses. [DALSEO DISTRICT IN DAEGU]

On a street near a park of prehistoric remains in Daegu, pedestrians stop for a look and soon take out their smartphones to take a picture of what hangs mid-air above the street sign - a hominid smashing the sign with his stone axe. Clad only in pieces of crudely made leather clothing, the hairy man sits above the street sign, as if ready to strike another blow.

There are some 20 more of these sculptures near the park, which were installed to make a nationwide promotion of the park in western Daegu.

The designer of the ad is the so-called “advertising genius” of Korea, Yi Je-seok. Head of the Jeski Social Campaign, Yi specializes in non-profit advertisements to raise public awareness about a variety of issues. 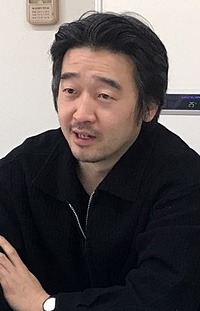 Yi became famous with his anti-war posters, which were installed on lamp posts featuring the phrase “What goes around, comes around” and an image of a soldier aiming a gun that wrapped around the lap post to point at the back of the soldier’s head.

With a series of advertisements co-developed with the Busan Metropolitan Police Agency, Yi gained more popularity with his funny ads, which managed to send powerful messages with just the right amount of humor.

Yi’s unique ideas have attracted potential employers from around the world, but he’s actually not had much chance to work in his home town, Daegu. This project with the park is the only one in which Yi has planned, completed and installed the advertisements all in Daegu.

“We see countless pebbles when we walk in the streets. They may be just pebbles, but they could be meteors or the remains of a stone axe from tens of thousands years ago. The value of the pebble differs greatly depending on whether you recognize its worth,” said Yi. “I thought that maybe, remains from the prehistoric period could be just lying around the streets of Daegu, and maybe we just don’t know it.”

This thought is closely related to his advertising philosophy, which is to make precious the ordinary and to make beautiful the ugly.

The idea of putting prehistoric men on streets signs and lamp posts that people pass by every day is what came out of it.

“If you reinterpret the ordinary and familiar things, you get a new meaning to the object. You come to think again that this is the place where many primitive remains were excavated,” said Yi.

Yi had always been interested in prehistoric times. Rather than the complicated rationale behind modern history, Yi was attracted to an age where he believed instincts and senses mattered more. “People learn with images before talking and writing,” said Yi. “Looking into the prehistoric ages can bring about a deeper understanding into the fundamentals of a human being.”

With the lifelike sculptures of prehistoric men, Yi wishes to bring his hometown to life, as well.