Exploring the history of archiving : Exhibit examines the evolution of technology used to record memories

Exploring the history of archiving : Exhibit examines the evolution of technology used to record memories 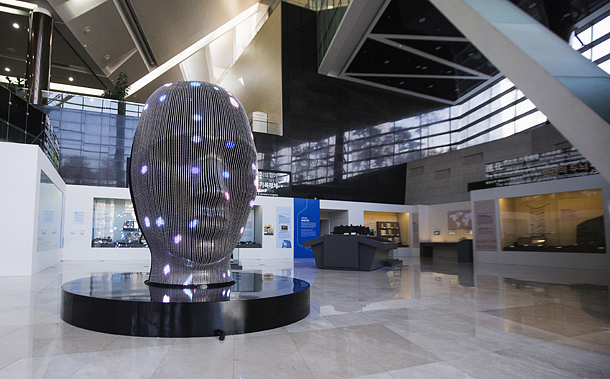 The Memory Museum within the National Library of Korea in Seocho-dong, southern Seoul, is dedicated to the history of archiving. The 200 items on display touch on the tools which people used to record and store memories and data from the pre-historic times to the present. [NATIONAL LIBRARY OF KOREA]

Before we typed on PCs, touched smartphone screens and wrote on paper, people in the past carved into rocks and clay or wrote on trees and even animal bones.

It’s the instinct to record that perhaps set us apart from other species.

It also is through documentation that our memories can expand beyond what our brains can remember and that we can pass down memories to the next generations.

The newly-opened Memory Museum within the National Library of Korea sheds light on how documentation evolved throughout history. From pre-historic rock art to Egyptian papyrus; from woodblock to modern printing; from a typewriter to a PC, humans have managed to find a better way to record and store memories and data.

1. Great Dharani Sutra of Immaculate and Pure Light (Mugujeonggwang Daedaranigyeong) 2. Tools used to record sound on display. 3. Cameras used to capture photos on display. 4. The exhibit shows computers and how they have improved over time. [NATIONAL LIBRARY OF KOREA]

Upon entering the exhibition hall, located within the institution’s digital library building, visitors see a media art piece featuring a human face and a book.

Renowned media artist Lee Lee Nam created the piece to celebrate the opening of the museum. Titled “Face Within a Book,” it features LED lights on metal slates and the lights create five different imageries that represent humans’ creativity and imaginativeness.

It represents that humans are destined to archive, and that books and libraries are important for that reason.

About 200 items are on display.

One of the highlights from the first section of the exhibition, titled “Archival Media, Awakening Civilization,” is the Great Dharani Sutra of Immaculate and Pure Light (Mugujeonggwang Daedaranigyeong), printed in the 8th century during the Unified Silla period (668-935) period. The publication is considered the world’s oldest woodblock print, although what is on display at the museum is a copy.

While this section is more about text, the second section expands to scope into how humans archived pictures and sounds. Naturally, items like cameras and films are displayed here. One of the interesting artifacts in this section is the stereoscopic viewer from the 1900. When people gaze at two photos through the viewer, they get a 3-D effect. Lee Kwi-bok, the chief conservator at the library’s preservation and research center said, “the basic logic is the same as the 3-D equipment today,” adding that such devices were brought to Korea by American missionaries. 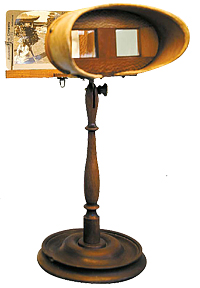 Stereo viewer from 1900. Officials say its logic is not so different from the 3-D technology of today. [NATIONAL LIBRARY OF KOREA]

There are some interesting programs that visitors can take part in at the end of the exhibition.

They can write a letter using ancient printing tools, like woodblocks and metal movable types, as well as a typewriter. Also if you have any data on older media formats, like VHS, reel-to-reel tape, cassette tapes or LP records, you can take them to the museum, which can convert the data into a more modern format, like digital files, CDs or DVDs.

“Civilization and the culture today exist because of archiving and media,” director Park Joo-hwan said. “Archiving is what transcends time and space and connects the past with the present. And libraries have been part of this process throughout the history.”

*The Memory Museum is located in the Digital Library Building of the National Library of Korea in Seocho District, southern Seoul. Hours are between 9 a.m. and 6 p.m. It closes every second and fourth Monday of the month, as well as national holidays. For more information, visit http://www.nl.go.kr/English/index.jsp.