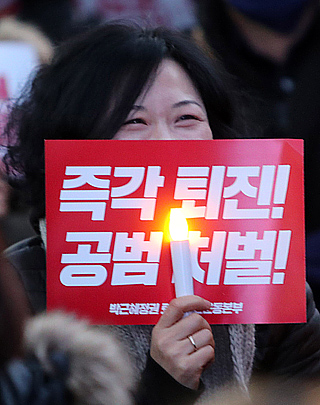 A protester holds a picket sign in Busan calling for President Park Geun-hye to step down and for her collaborators in the unprecedented abuse of power scandal to be punished. [SONG BONG-GEUN]

It was in the 1990s that stories about city buses drastically decreased on newspaper and television news. As more and more reporters owned cars and drove, the bus was pushed out of the media attention. When it comes to public transportation, we’ve heard how Hillary Clinton didn’t know how to swipe a MetroCard as she rode the New York City subway last year. Former UN Secretary General Ban Ki-moon rushed to gain popularity as soon as he returned to Korea, but he only exposed how unfamiliar he was to the daily lives of average citizens and dropped out of the race early on.

It is the duty of politicians to use public transportation to familiarize themselves and understand how ordinary citizens live every day. But we are appalled by some politicians visiting markets, senior centers and slums, pretending to care about people’s lives every five years in the election seasons. Will they come back after the election?

It is not just the political elites who claim to be average citizens but fail to win the hearts of ordinary people. Elites in law, business, academia and public service often lose trust because of the discrepancy between what they say and what they do. While it was the Choi Soon-sil scandal that started the massive candlelight protests, the targets are expanding. People are increasingly driven by passion to reform the “collaborators” who let the absurd corruption happen and what American professor Michael Johnston calls a chain of corruption and extensive elite cartel system.

The crowds in Gwanghwamun Square, central Seoul, ask, “Is this really a nation?” People are furious at the collective egocentrism of the elites who are not willing to give up their warm, comfortable spots. The bureaucrats, financial officials, prosecutors and military are often described as the “mafia.”

These elites are so accustomed to a “league of their own” that their sense of communication and interpretation of the public sentiment have considerably weakened. The opinion leaders in the United States and the United Kingdom fail to predict the election of Donald J. Trump and passing of the Brexit, two incidents that change the flow of American and European history. An extraordinary negotiator and gambler, Trump is betting on this weakness of the elite. While a series of “shock and awe” policies garnered fierce criticism, he does not blink. He counts on the working-class white people who are tired of the establishment. Rather than investigative reports by elites at the New York Times and CNN, they trust the simple 140-word tweets from Trump.

Aspiring presidential candidates can learn from Trump’s communication and persuasion skills. While Trump’s words are rough, they are easy to understand. Political leaders should lower themselves and use familiar language when approaching the public. The teachings of Buddha were so easy that even uneducated people could understand them.

A recently published book — “Icon of Miscommunication: Seoul National University Students’ Communication” — highlights differences between the elite and average people. A 22-year-old sociology student Cho Hyun, meets a high school gang member to conduct research for a project for a media class. “I wondered how his background and mindset is different from mine, as I’ve never had a chance, or intention, to meet someone like him.”

The 2016 Social Integration Report by the Korea Institute of Public Administration surveyed 8,000 adult men and women around the country, and only 56 percent, said they had hopes that their children will climb up the social ladder.

The rate has been rapidly decreasing for three consecutive years. In order to save the nation from being divided because of the elites, we cannot allow social immobility to prevail.