Fighting to be able to return home : After enlistment scandal, Steve Yoo is battling to come back to Korea

Fighting to be able to return home : After enlistment scandal, Steve Yoo is battling to come back to Korea 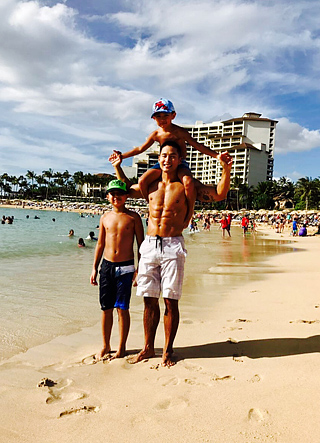 A photo of Yoo Seung-jun, or Steve Yoo, who has been banned from entering Korea after he took U.S. citizenship and decided not to serve in the military in Korea, with his family. [JOONGANG ILBO]

It is always a hot issue whenever a celebrity goes into the army to serve their mandatory duty, and it might not be exaggerating to say that the attention on celebrities have been ever more fierce ever since singer Yoo Seung-jun, also known as Steve Yoo, gained U.S. citizenship and chose not to enter the army in 2002.

Yoo, one of the top singers at the time, was banned by the Korean government from ever entering Korea again after public outcry.

Fifteen years later, Yoo has been fighting with the Korean government for the past three years so that he can be granted a visa to enter Korea. After he was denied in a suit in October, he appealed and is waiting for the court’s decision, which is scheduled to come out on Feb. 23. Prior to the release of the result, the JoongAng Ilbo held an exclusive phone interview with Yoo early this month. Below are excerpts from the interview.

Q. What have you been up to recently?

A. I have been filming a movie in China since September. I went on a vacation with family in December. My two sons go to school in Beijing and I went on a trip with them to Southeast Asia and Hawaii.

The court back in October said you make a case which can “impede the social order” as they denied your request to enter Korea. Do you agree with this statement?

Before I answer that question, I want to share a story from my recent travels. I often encounter Korean students when I travel overseas. I feel [burdened,] but I step up and tell them to study hard because I want to impose some good influence, just like I did when I was a singer. Even though they have never seen me before, they are usually energized by what I say. The important thing is that they weren’t even born when I was in the entertainment business. Most college students don’t know me. There are so many who don’t recognize me and yet somehow I am someone who can “impede a social order?” Because of this military issue, I have not stepped on Korean soil in 15 years. I have been disgraced as someone who dodged military duty. From 26 to 41, during my prime years, I have become the symbol of [someone who dodges their military duty.] After my case, celebrities with residencies in other countries went to the military and people [compared] them to me. Whenever a top star enlists, my name pops up. Based on this, [don’t you think] people start to think more about their responsibility and duty to the country, thanks to me?

What’s the logic in your appeal?

I made a 15-minute video explaining [my situation] to the legal body. There is a limitation because I can’t go to the court myself, but there isn’t any other way. I explained that the very first report (which claimed that Yoo will go to the army) was [wrong.] Of course, that report was proven to be false later. I also included that I was seriously debating whether to go to the army or not, and I ended up not going because my parents persuaded me not to.

Would you go to the Supreme Court of Korea and appeal again if you lose in the appellate court?

I have not thought so deeply about it. In the past 10 years, I have never “planned” something and then proceeded. In fact, while I was overseas for the past 15 years, many have suggested filing a suit against Korea. However, Korea is a country and I’m just an individual. I have been taught since I was young that I [should not do something against the country.] But I came to think that if I stay still, nothing will ever happen. I started to think if I didn’t take action, no one will care about my issue.

I have missed Korea, and I have tried to show how I feel whenever I can. I don’t want my Korean citizenship to be given back to me. I just miss Korea. After I made that internet video (explaining his desire to return to Korea) in 2015, rumors about tax evasion and other things were spreading. I have been paying taxes diligently. [Tax evasion rumors] have been wrongfully used against me as I have passed the age [that requires me] to serve in the military.

What are the responses from Korean fans?

There are some people who remember me and I’m thankful for them. [The public’s opinion] is different from before. Fans who love me and cheer me on don’t care very much about the things [related to enlistment]. They think a lot about what it is like to be in my shoes. They believe that I sincerely wanted to serve in the military. I meet up with fans in China every year on Christmas Day, New Year’s Day and my birthday which falls on Valentine’s Day. On my debut-anniversary (April 1), they rented out a concert venue.

Is there anything you want to say?

Even if I can’t come back to Korea, Korea is my home country and my pride. I miss Korea.