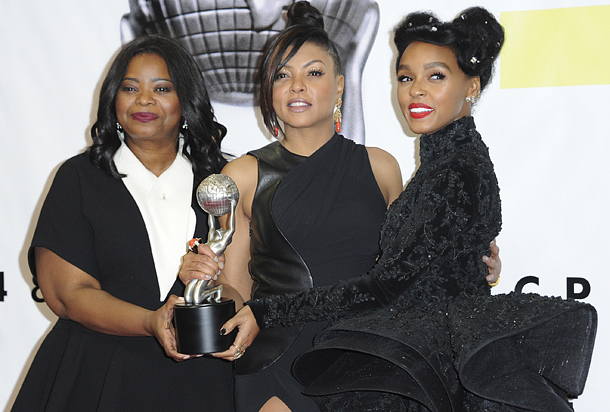 From left: Octavia Spencer, Taraji P. Henson and Janelle Monae pose in the press room with the award for outstanding motion picture for “Hidden Figures” at the 48th annual NAACP Image Awards at the Pasadena Civic Auditorium on Saturday in Pasadena, California. [AP/YONHAP]

LOS ANGELES - “Hidden Figures” and Taraji P. Henson had a big night at the NAACP Image Awards, where Hollywood glamour shared the stage with somber remarks from the director of Washington’s new African-American museum.

“Hidden Figures,” the fact-based drama about the contributions of black female mathematicians to the U.S. space program, won the award for best movie Saturday, while star Henson was honored as best actress.

“There are roles you accept that scare you. And this one did, because I failed math,” said Henson, recalling that she grew up in a time when math and science were supposed to be “just for boys.”

“I made it my mission to do this film. This film was very important. It was bigger than me. ... People are seeing it because it’s important,” she said.

Henson also won the trophy for TV drama series actress for her role as matriarch Cookie in “Empire.”

Denzel Washington added to his awards haul for “Fences,” winning the trophy for best movie actor. Washington, who directed the adaptation of August Wilson’s play, won a Screen Actors Guild award for his performance and is vying for an Oscar Feb. 26.

“It is a privilege, an honor, a responsibility, a duty and a joy to bring his brilliance to the screen,” Washington said of the late Wilson, whom he called among America’s greatest playwrights.

The TV sitcom “black-ish” came close to sweeping its categories, taking the award for best TV comedy and with stars Anthony Anderson and Tracee Ellis Ross getting top acting trophies. In non-televised awards given Friday, the show earned honors for co-stars Laurence Fishburne and Marsai Martin and a writing trophy for creator Kenya Barris.

A directing award to Donald Glover for his comedy series “Atlanta” prevented a “black-ish” monopoly at the 48th Image Awards, which are presented by the National Association for the Advancement of Colored People.

Lonnie G. Bunche III received the NAACP President’s Award for his work as founding director of the Smithsonian’s National Museum of African American History and Culture.

“This is a big deal for a historian from New Jersey,” Bunche said. “With this award, you recognize more than me. You recognize the power of history.”

He said he was accepting the award on behalf of many others, including enslaved women who retained their humanity and “all the black men whose lives and hopes were shattered by the criminal justice system or destroyed by the racial violence, like that of Emmett Till,” a teenage lynching victim in 1950s Mississippi.