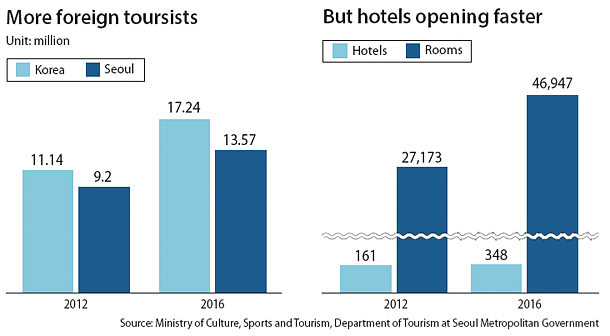 In Korea’s tourism industry, there are concerns about oversupply in accommodations. More hotels are being built, but the number of tourists is not increasing nearly as quickly.

In the past four years, the number of accommodations for tourists in Seoul has expanded 72.7 percent, reaching 348 hotels by the end of 2016. Over that same period, the number of tourists visiting Korea only rose 54.7 percent to 17.24 million tourists, according to the Ministry of Culture Sports and Tourism. The increase in Seoul is even smaller, 47.5 percent to mark 13.57 million tourists.

The ministry tends to focus on numbers in Seoul because the capital acts as a barometer for Korea’s overall tourism industry. Around 80 percent of all foreign tourists travel around Seoul at least once, and more than half of all tourist hotels in Korea are concentrated in the capital.

The main cause of the current oversupply, according to industry analysts, was a special legislative act put in place in July 2012 to loosen regulations on building hotels. At the time, tourism was booming, but there were not enough rooms to accommodate all the visitors. The act lifted many restrictions on hotel construction, doubling the floor-to-area ratio and allowing hotels to be built without parking spaces.

But the tourism industry overbuilt. In the past five years, more than 40 new hotels have opened in the quarter-square-mile neighborhood of Myeong-dong, a bustling tourist destination in central Seoul, according Kim Dae-yong from the Korea Hotel Association.

The consequences are starting to show. Rooms are vacant, revenue is falling and hotel owners are responding by lowering their prices. Around 20 to 30 percent of rooms are typically left empty, even in the most crowded parts of Gangnam District, another popular neighborhood in southern Seoul, according to Moon Ji-hyung, a board member at the company With Innovation. The company runs a service where vacant hotel rooms are made available to members at a discount, by as much as 40 percent, and Moon says the service is becoming more popular.

Even as Korean hotel owners struggle to fill rooms, Chinese tourists traveling in large groups still have a hard time finding hotels that can accommodate them. According to the Korea Culture and Tourism Institute, Chinese tourists typically consider it adequate to spend around 60,000 to 70,000 won ($50 to $60) per night. However, of the 187 new hotels built after regulations were loosened in 2012, 47 are either five-star or above and typically charge 100,000 won per night or more. Cheaper hotels have also been built, but they have not been able to meet the demands of Chinese tourists.

“It’s hard to make ends meet in Seoul with just 60,000 to 70,000 won per night for a room,” said Lee Dae-sik, a manager at the Nine Tree Hotel in Myeong-dong, “so obviously, it’s hard to find three- or four-star hotels with enough rooms.”

Chinese tourists who fail to find affordable accommodations in downtown Seoul are forced to look elsewhere, sometimes outside of Seoul, even when empty rooms are plenty in the capital.

“According to a market report on the lodging industry based on Seoul’s performance last year, there were 4,142 fewer rooms in mid-to-high price range hotels and 5,261 mid-to-low price range hotels when compared to demand,” said Kang Seok-won from the Ministry of Culture, Sports and Tourism. “At this rate, the shortage of mid-to-high and mid-to-low price range rooms will worsen by 2020 in Seoul, as demand for those rooms has risen by 11 percent in the past five years compared to an 8.9 percent increase in supply.”

The solution may just be time. In three to five years, hotels that fail to adjust to the competition for lower prices will likely fall behind, one industry source said.