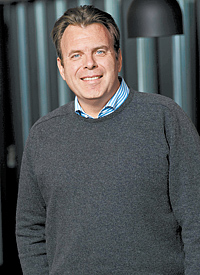 Maersk Line, the world’s largest container shipping company, has frequently been cited as the biggest beneficiary of Hanjin Shipping’s void. The Korean player had a dominating presence in the trans-Pacific business, while the Danish company lagged relatively behind.

But in Maersk’s latest earnings report Wednesday, the company posted a $376 million loss last year, falling below industry expectations that the Danish line would absorb Hanjin’s lost business. The numbers show not even the largest shipping line in the world could dodge the industry’s low freight rates and oversupply problems.

“I think the [insolvency of Hanjin] made the industry realize the risks of some of the behaviors that we have seen from the competition,” Robbert van Trooijen, chief executive of Maersk Line’s Asia-Pacific region, told the Korea JoongAng Daily on Wednesday. “If you look at the results of 2016, you can see we have improved our unit costs by 13 percent, high utilization of ships … so all the elements of bottom line except for the revenue element.”

The volume of East-West trade grew by 11.4 percent last year to 3.7 million twenty-foot equivalent units, but revenue declined nearly 20 percent, according to Maersk’s report. The company has been blamed for starting a worldwide price war banking on its economies of scale in the market, but van Trooijen rebutted the claims. “I don’t think any single carrier is strong enough to start a price war by itself,” he said.

The chief also denied talk that it was the biggest beneficiary of Hanjin’s fall. “Don’t forget that the biggest trade that Hanjin had was the Pacific trade with the U.S. and we are relatively small player,” he said. “I actually think that carriers who have a bigger exposure on the Pacific trade benefited a lot more than we did.”

Van Trooijen did say that cargo owners called on Maersk for help as Hanjin’s insolvency issue began to grow. “We had several phone calls from customers who were saying, ‘I need to do something now because the cargo is stuck on ship; can you do something to help?’ and we did something to help.”

This year, Maersk has set the goal of raising profit by $1 billion. As part of its strategy, the company will focus on becoming an integrated transport and logistics company with its terminals and freight forwarding affiliates. “If you see the integrated supply chain as a whole, we are actually players in many phases of that supply chain and now we want to get much more into that,” van Trooijen said.

Another change will be the beginning of a partnership between the 2M shipping alliance and Hyundai Merchant Marine.

“I actually think that people are underestimating the resilience of Hyundai and the fact that Hyundai is now the national container carrier of a global size,” he said.

Still, Maersk reiterated in a statement that cooperation with the Korean player is outside the scope of the alliance. The partnership allows HMM access to the 2M network through a combination of slot exchanges and slot purchases, wherein HMM can rent out cargo spots on 2M ships. The two members of the alliance, Maersk and Mediterranean Shipping Company, will also charter some of HMM’s vessels.

When asked whether Maersk has any intention of acquiring HMM, a widely held speculation, van Trooijen answered with a definitive “no.”

For SM Line, the new Korean shipping line set to enter the Pacific trade with assets from Hanjin, he had doubts.

“I think’s it’s a bold move. There are some fairly big players competing on those trades … but to compete in that trade with a single string, I think it’s tough. So we’ll look with interest on how they develop.”