Rough road ahead as Hanjin liquidates

Rough road ahead as Hanjin liquidates

On Friday, the sails will officially be lowered on Hanjin Shipping, once the nation’s largest and world’s seventh-largest shipping line.

After five months under court receivership, Seoul’s bankruptcy court has decided to liquidate the 40-year-old company. While some say it’s time to soldier on and shift focus to Korea’s remaining container line with global operations, Hyundai Merchant Marine, others are mourning the loss of Hanjin as a symbol of the country’s flagging shipping industry. The bankruptcy is a massive loss for coastal regions in the country whose economies are dependent on outbound freighters and for investors who have been speculating in Hanjin shares in the past few months.

The government and industry analysts have blamed Hanjin’s fall on a tough market environment, including historically low freight rates and declining demand for shipments in a tepid consumer economy. But Hanjin Shipping, a storied icon whose rise seemed to follow Korea’s economic ascent, has weathered through bigger storms in its history, leaving many to wonder how the giant fell and why it fell now. 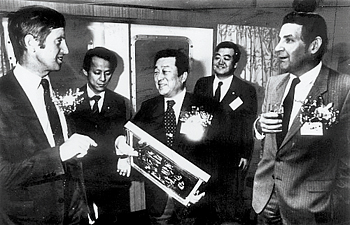 Born out of crisis

Hanjin Shipping was started in 1977 by Hanjin Group founder Cho Choong-hoon, who sought to create a shipping subsidiary under his conglomerate.

The venture turned out to be ill-timed.

Two years later, an oil shock in the wake of the Iranian Revolution hit the world and affected trade volume in Hanjin’s core trans-Pacific route. Business tanked 40 percent, and the effects of the oil crisis reverberated through the late 1980s.

Cho understood the shipping unit’s difficult financials. Trade volume and freight rates were both declining while vessel and equipment purchases were pushing up the company’s debt.

Cho concluded the company could not survive by merely waiting for the market to recover. In 1986, he decided to reform Hanjin Shipping’s cargo management system by applying the know-how of Korean Air, the conglomerate’s airline, which had developed a more systematic way to handle cargo. After a year, Hanjin was able to cut its operational costs by 35 percent, and revenue increased 50 percent, bringing it in the black.

Another crisis befell Hanjin Shipping in 2009, after the global financial crisis a year earlier led to a 4.5 percent fall in the world’s shipping volume. It was a record decline, putting global shipping lines to the test with steep falls in demand and freighter charges.

By then, founder Cho Choong-hoon had passed away. Hanjin Shipping was handed over to his third son, Cho Soo-ho, but when he died in 2006, ownership was then passed on to his wife Choi Eun-young, who was forced to weather through Hanjin’s second crisis.

As chairwoman, Choi’s strategies and investment decisions were often ill-fit for market conditions at the time and instead left the company with snowballing debt.

The market, however, never expanded. China’s economic growth started to decelerate, and the global economy limped its way out of the 2008 crisis. In the end, Choi couldn’t stand the company’s liquidity crunch, and in 2014, she tossed management to her brother-in-law Cho Yang-ho, the chairman of parent company Hanjin Group.

Despite Cho Yang-ho’s efforts to save the company, including an injection of trillions of won in cash, Hanjin Shipping ended up filing for court receivership at the end of August last year.

Too big but failed

Hanjin Shipping’s large supply chain means the ripple effect from its bankruptcy will be massive and affect workers outside the company’s employ. The Korea Shipowners’ Association estimates over 2,300 jobs will be cut across the shipping industry, including jobs at the iconic Port of Busan.

The Korea Maritime Institute projects an even tougher figure of 12,000 lost jobs in Busan and South Gyeongsang, regions where Korea’s shipping industry is based. Professors estimate a loss of more than 25,000 jobs across the nation when taking into account suppliers and logistics companies related to Hanjin.

“Hanjin used to be a dream company for aspiring talent at maritime universities and those eyeing jobs in the shipping sector,” said Hwang Jin-hoi, director of maritime industry research at the Korea Maritime Institute. “But now, as the shipper has fallen, maritime university graduates have lost a good destination.”

As for private investors who bought Hanjin shares, they’re not likely to get anything out of the company as employees and creditor banks will be the first to receive money from sales of Hanjin’s remaining assets, which are very few.

The share price of Hanjin Shipping has been fluctuating steeply since it went under court receivership last year. It closed at 780 won (70 cents) on Feb. 2, a plunge of 17.98 percent from the previous day, with further trading halted as the court announced it was ending its bankruptcy protection.

Hyundai Merchant Marine said it aims to secure a 5 percent market share and 5 percent operating margin by 2021. Currently, HMM’s market share on all shipping routes is about 2.2 percent.

There have been some signs of progress. The Korea Investors Service, a credit rating firm, saw positive prospects in creditors’ support of HMM and the shipping line’s importance as Korea’s sole global container line.

It upgraded its rating of HMM from D (default) to BB (stable) on Thursday. The company has managed to improve its debt ratio from 2,007 percent in 2015 to 235 percent in 2016, according to its earnings report for last year.

HMM still has much to improve on its financials. It posted 4.58 trillion won in revenue last year, a 19 percent fall from the previous year, and an 833.4 billion won operating loss.

SM Lines, due to start operation in March, is less exposed in the market, but there are already concerns that it might not be able to take off as scheduled given the notorious difficulty of breaking into the trans-Pacific business.

“We have seen shippers fail in the past because they had very weak customer networks and little experience in the trans-Pacific business, but our company has business know-how, human resources, and systems used by Hanjin Shipping in its 40 years of history as a shipper and 28 years of business experience on trans-Pacific routes,” said Kim Chil-bong, CEO of SM Lines, in a statement released last month.

“Our goal is to offer competitive pricing based on customized service to our customers, not offering them low cost against market trends.”

The Korean government plans to add support for remaining shipping companies by providing 1.9 trillion won through the Korea Asset Management Corporation to secure more ships. “We also aim to link shipping companies and cargo owners so that they can build mutual growth,” Kim Young-suk, the minister of oceans and fisheries, said at a forum held by the Korea Maritime Institute last month.

Kim In-hyeon, a professor at Korea University Law School who has also served as a ship captain in the industry, warns that it’s too early to be optimistic about the performance of Hyundai Merchant Marine and SM Lines. “The market is different from 30 years ago when shipping companies could partly control freight rates,” he said.