SsangYong’s Korando C is back with a roomier back seat

SsangYong’s Korando C is back with a roomier back seat

The local unit of Indian auto giant Mahindra & Mahindra wants to stretch that winning streak into the larger segment with its midsize SUV Korando C, a partially overhauled model which comes back to the market after four years.

The Korea JoongAng Daily took the diesel model for a test drive on a 290 kilometer (180 miles) course from Seoul to Hwacheon, Gangwon in January.

The first thing one notices about the fifth generation model is how spacious it is, especially in the back seat. 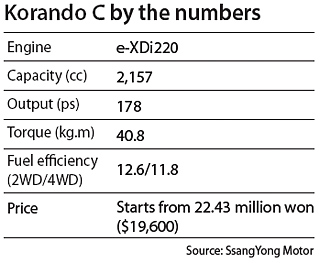 The raised section between the footwells in the rear of the car has been eliminated to give more leg room. It seems like a small change but greatly improves the experience of travelling in the rear.

SsangYong Motor explained that such an improvement was possible because of its long experience in making SUVs. According to the automaker, the raised section in other four-wheel drive SUVs is mandatory in order to deliver power to the rear wheels.

But the Korando C, which is also offered in four-wheel drive, has managed to get rid of it.

The back seat has been designed to recline as well, provided the trunk is not fully packed with luggage.

It is a car that pampers backseat passengers, so good for families.

An exterior known for its masculinity has a more sophisticated front armed with 11 highly luminous LED lights embedded in its signature shoulder-wing grille.

The extended rear bumper, not often featured on domestic SUVs, also contributed to a strong yet stable image for the car.

When starting from a fixed position, the acceleration responded quickly and felt light.

However, additional acceleration when the car is traveling over 80 kilometers per hour felt tardy and heavy. Even when the pedal was put to the metal, it took time for the car to push ahead and a lot of noise was generated. For novice drivers, the heavy steering wheel may afford a stable feel, especially on winding courses.

The car is equipped with an e-XDi220 engine, which qualifies for the Euro 6 standard, boasting 178 horsepower and 40.8 torque.

On Korean roads, when a car cuts in to the next lane, its driver usually flashes the emergency lamps three times to signal that the maneuver is complete.

SsangYong Motor designed a separate button to do that signal. It says it’s the first time any carmaker in Korea has installed such a function.

Also, acknowledging that the six color options offered with the Tivoli was a hit with customers, SsangYong is offering the same options for the Korando C.

However, despite its general spaciousness, the backseat wasn’t able to deliver as stable and smooth a ride as expected.

Every bump was felt. On winding courses, the backseat passenger had to grab on to something to prevent from sliding to one side.

SsangYong Motor’s foray into the domestic SUV market will continue.

It is poised to launch a luxury large SUV known under the project name Y400 in the first half of this year.