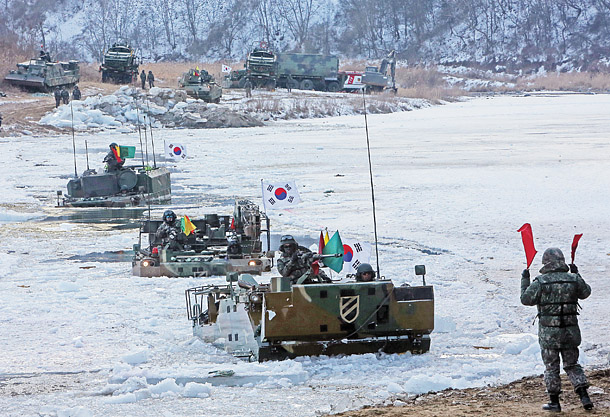 Pyongyang fired a missile into waters off its eastern coast Sunday morning, the first test-firing by North Korea this year and since U.S. President Donald Trump took office, according to the South Korean Joint Chiefs of Staff.

Launched from Banghyon Air Base in North Pyongyan Province at 7:55 a.m., the missile reached an altitude of about 550 kilometers (342 miles) and flew 500 kilometers before splashing into the East Sea, both figures which indicate that it wasn’t an intercontinental ballistic missile (ICBM), said an official from the Joint Chiefs of Staff.

It appears that the missile was a Rodong medium-range class meant to target Japan, according to another South Korean military source who spoke on the condition of anonymity.

A more detailed analysis will take days to draw up.

The South Korean military said it was also considering the possibility that the missile was an enhanced version of an intermediate-range Musudan missile, noting that intelligence authorities have recently seen signs that Pyongyang was developing a new missile engine.

The projectile was detected “immediately after launch” by South Korea’s anti-ballistic radar, the Green Pine, said the military.

As to why the communist regime chose Sunday for the provocation, the second source said it could have been part of a celebration to commemorate the 75th anniversary of former leader Kim Jong-il’s birth, which falls this Thursday, or a message to the Trump administration to adopt new policies toward the regime.

The test also came as Japanese Prime Minister Shinzo Abe was meeting Trump in the U.S.

Kim Keun-sik, a political science professor at Kyungnam University in Changwon, South Gyeongsang, said the fact that North Korea didn't test an ICBM suggested it was seeking a “compromise” with Washington, or at the very least testing the Trump administration’s reaction to a lower grade provocation.

The U.S. Strategic Command said in a statement that the launch of a medium- or intermediate-range ballistic missile “did not pose a threat to North America.”

Pyongyang, which usually releases official statements through its state-run media, has yet to announce anything on the matter.

Banghyon Air Base is 45 kilometers west of the Yongbyon nuclear facility, the centerpiece of Pyongyang’s nuclear program. It’s also the same place where North Korea test-fired an intermediate-range Musudan missile on Oct. 15, 2016, which exploded within seconds after its launch.

The launch on Sunday came amid heightened tension in Northeast Asia and the United States after North Korean leader Kim Jong-un declared in a New Year’s address on Jan. 1 that the regime was in a “final stage” of test-firing an ICBM.

A spokesman for the North’s Ministry of Foreign Affairs appeared on the state-run Korean Central Television several days later and claimed that the launch will be held “any time, any where” Kim wishes, unnerving governments around the world.

In a statement made Sunday by Cho June-hyuck, spokesman of the Ministry of Foreign Affairs, Seoul condemned Pyongyang’s missile launch and said it was “an explicit and clear violation” of UN Security Council resolutions banning such military provocations, adding that it “seriously threatened” the peace and safety of the Korean Peninsula as well as the rest of international society.

North Korea’s repetitive provocations “brazenly show the irrational nature of the Kim Jong-un regime and how it’s fanatically obsessed only with the development of nuclear weapons and ballistic missiles,” the statement read.

Cho said the North’s “daily practice” of provocations will only pull international society together to cooperate towards Pyongyang’s denuclearization, adding that the regime will realize one day that “it won’t be able to survive unless it scraps all of its nuclear and missile programs.”

Both leaders rushed to call a joint press conference at the estate just a few hours after the launch, in which Trump briefly said: “I just want everybody to understand and fully know that the United States of America stands behind Japan - its great ally - 100 percent.”

Abe, who was standing side-by-side with Trump, said the launch was “absolutely intolerable” and that North Korea “must fully comply with the relevant [UN] Security Council resolutions.”

“During the summit meeting I had with President Trump,” said Abe, “he assured me that the United States is always with Japan 100 percent.”

The press conference was held a day after Trump and Abe held their first official meeting in Washington D.C. before flying to the luxurious clubhouse for a time of special bonding, which included golf.

Their first joint statement issued Friday by the White House read that the U.S. and Japan “strongly urge North Korea to abandon its nuclear and ballistic missile program and not to take any further provocative actions.”

The call was said to have been made at Kim’s request.

Kim earlier chaired a National Security Council meeting at the Blue House, which was attended by the ministers of foreign affairs, unification, national defense, and also the head of the National Intelligence Service and other senior presidential secretaries.

President Park Geun-hye, who was impeached by the National Assembly last December and is now awaiting a final Constitutional Court ruling on the impeachment, was excluded from the meeting.

China, a key ally of the North, has yet to release a statement.

Reuters cited an anonymous U.S. government official as saying that the Trump administration is “likely to step up pressure on China to rein in North Korea,” reflecting Trump’s personal view that “Beijing has not done enough on this front.”

The official said that Trump and his aides are “likely to weigh a series of possible responses,” including new U.S. sanctions to tighten financial controls on the North, an increase in U.S. naval and air assets in and around the Korean Peninsula and accelerated installation of new missile defense systems in South Korea.

If that last option includes the Terminal High Altitude Area Defense (Thaad) anti-missile system, it could mean that Thaad could be deployed earlier than expected this year. The missile system was planned to arrive some time between August and October.

North Korea has a history testing short-range Scud and mid-range Rodong missiles capable of reaching South Korea and Japan, but its success with intermediate-range Musudan missiles, which can reach U.S. military bases in the Pacific such as Guam, has been checkered.