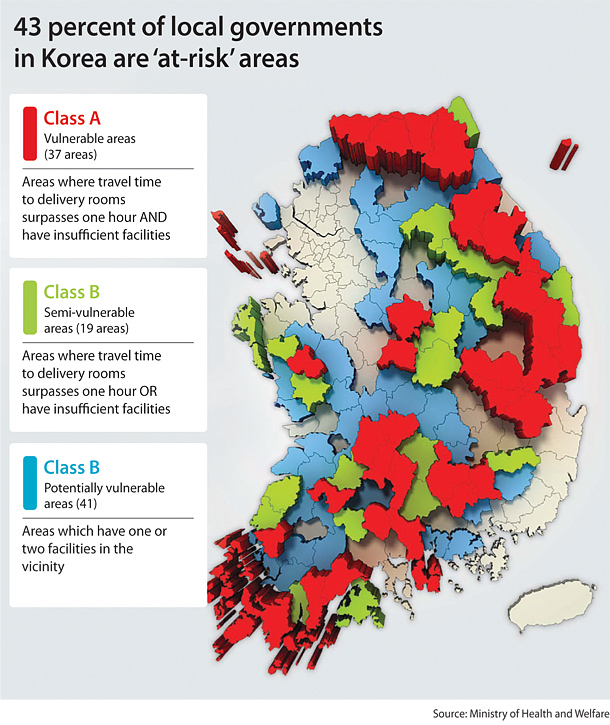 As the labor pains became more and more frequent, she woke her husband at 5 a.m. In order to give birth to her second child, she had to travel 30 kilometers (19 miles) to the nearest obstetrics and gynecology clinic in Icheon, Gyeonggi.

The snow had fallen throughout the night, heaping up outside the house. The road was frozen and her husband, Song Tae-hun, 35, was forced to slow down, taking twice as long as usual.

“Every five minutes, my wife complained of labor pains, the road was slippery and we were caught by traffic lights, so I was quite anxious,” said Song. “Going through the snowstorm on the road was terrifying and it had never been so difficult.”

Fortunately, Song was able to safely deliver their child.

In Yeoju, there were 822 babies born in 2015. Compared to other regions with a similar population of 104,000, it is not an insignificant number of newborns. However, there are no existing ob-gyn clinics in the city of Yeoju.

Nationwide there is a total of 226 municipal areas composed of cities, counties and districts, with 43 percent of them qualifying as Class A or vulnerable areas by the government.

Areas are deemed Class A if 30 percent of mothers take more than one hour to travel to a delivery room and insufficient numbers of delivery rooms are available.

There are two subsequent levels of Class B or semi-vulnerable, areas that meet the criterion of either inaccessibility to clinics or travel time, and Class C, or potentially vulnerable areas, which have one or two clinics in the vicinity. Notably, Classes A, B and C are not likely to be found in metropolitan areas.

The last clinic for delivery in Yeoju, Eden Ob & Gyn, closed in February 2012. One former staff member said, “The number of patients shrank, profitibility was difficult and it was hard to procure the anesthesiologists necessary.”

Although local governments wish to bring back the facilities, the labor shortage of medical staff is an obstacle. One Yeoju ob-gyn clinic even crossed out the ob-gyn in their placard and offered Botox, fillers and dermatological procedures, responding to the conditions of the market.

“Hiring doctors and nurses for delivery obstetrics and gynecology is as difficult as plucking stars from the sky,” said Ahn Myeong-gi, head of a health center in Hapcheon County, South Gyeongsang. Korea has fallen into a cycle where the low fertility rate and financial risks involved in the ob-gyn profession leads to the breakdown of delivery room infrastructure involving the appropriate medical specialists and facilities.

Jeong Ho-yeon, 54, ob-gyn and head of the Beautiful Hospital at Hongcheon County, Gangwon, said, “Supporting existing delivery rooms over building new ones is more effective by a ratio of three to one.” However, in this hospital there were 120 babies delivered in 2013. The following year, there were 80 and last year, a mere 63.

Operating on a deficit for three months, the Beautiful Hospital considered closing the delivery room. In order to recover the number of delivery rooms, the government supported 35 hospitals this year with 5.7 billion won ($4.98 million). But this was insufficient in stemming the shuttering of further delivery rooms.

Last year, the government opened additional childbirth facilities for Class A areas, but applicants were scant.

“Public medical colleges should be established to foster obstetrics, gynecology and emergency medical specialists and charge them with the obligation [to practice] in the countryside,” said Lee Jong-gu, head of the Global Medical Center at the Seoul National University College of Medicine, thereby incentivizing future medical students to start careers in vulnerable areas.