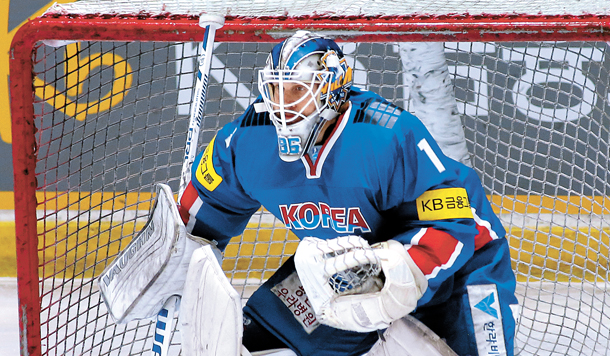 With the addition of Canadian-born Korean ice hockey goaltender Matt Dalton, the Korean men’s ice hockey team dreams of a “miracle on ice” at the 2018 PyeonChang Winter Olympics.

The team came a long way as they once lost to Japan 25-0 in 1982, and lost all five matches at the 2014 Division I Men’s Ice Hockey Championships. At the time, the goaltender was pointed out as Korea’s weakness. 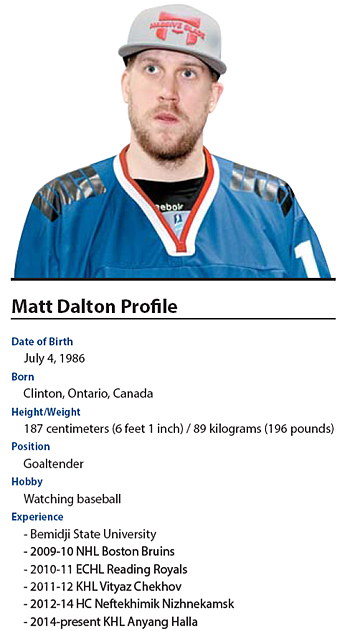 “The role of the goaltender accounts for more than 60 percent of the game in ice hockey,” Kim Jung-min, head of the publicity department for the Korea Ice Hockey Association, said. “Just like how a pitcher’s scoreless innings can lead to a win in baseball, goaltenders can lead the team to an unexpected win in ice hockey.”

Over the past few years, the Korean men’s ice hockey team showed significant improvements with the addition of Dalton.

Last April, Korea earned its first win against Japan in 34 years at the 2016 Division I Men’s World Ice Hockey Championships. Recently, the 23rd-ranked team in the world swept Japan 3-0 at the Euro Ice Hockey Challenge, a friendly match between four countries, in Goyang, Gyeonggi on Saturday. With the win, Korea’s record against Japan improved to 2 wins, 1 tie and 19 losses.

“I feel good that we won against our historical rival, Japan,” Dalton said after their match against Japan.

Not only that, Korea won against the 13th-ranked team, Denmark, 4-2 during Saturday’s friendly match.

Dalton was granted Korean citizenship in March 2016 under a special naturalization law. During his college career, Dalton was a goaltender for Bemidji State University, where he helped the team advance to semi final of the NCAA Division I men’s ice hockey championship and in 2009, he signed as a free agent by the Boston Bruins of the National Hockey League (NHL), but never made an appearance.

After he played in the Kontinental Hockey League (KHL) for three years, he then played for Anyang Halla of the Asia League Ice Hockey.

In ice hockey, when a player shoots a puck to the net, the speed of the puck is about 170 kilometers per hour (106 miles per hour). The goaltenders have to block about 30-50 of those shots per game.

“Playing baseball in high school helped a lot with catching pucks,” Dalton said. Although he no longer plays baseball, Dalton enjoys watching baseball as he is a fan of the Doosan Bears of the Korea Baseball League.

Dalton played a big role throughout the season helping Anyang Halla lead the league as he recorded 1.68 goals against average with 0.938 save percentage in 40 games.

Dalton is aiming for gold at the 2018 Asian Winter Games starting on Feb. 18 in Sapporo, Japan.

The team is scheduled to play against Kazakhstan, the 16th-ranked team, on Feb. 22, Japan on Feb. 24 and China on Feb. 26. Korea will have to overcome Kazakhstan to have a chance at winning a gold medal.

At the Olympics, Dalton will have to face Canada, the best hockey team in the world as well as his home country. Star players such as Jonathan Toews of Chicago Blackhawks of the NHL are part of the Canadian men’s ice hockey team.

“I’ll try my hardest in helping the Korean team, my second homeland, at the Olympics,” Dalton said.