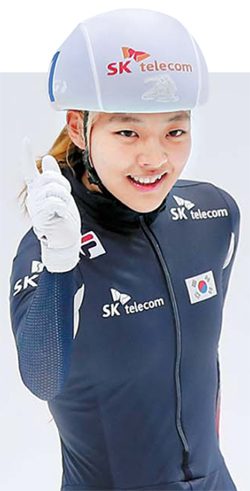 Kim crossed the finish line at 8 minutes 00.79 seconds, 0.11 seconds ahead of Nana Takagi of Japan. With the win, she earned 60 points and her second win of the season. Kim kept herself within fourth to fifth place throughout the race and in her final lap, she showed an explosive sprint to put herself ahead of every other competitors.

“I was surprised in the beginning when the unexpected players led the race,” Kim said. “But my plan of a last lap sprint worked out well.”

Kim is selected as a medalist nominee in women’s speed skating mass start event at the 2018 PyeongChang Winter Olympics.

“I gained confidence from this win,” Kim said. “I’m excited to see good results at the 2018 Sapporo Winter Asian Games and for the 2018 PyeongChang Winter Olympics.”

Also, Kim was very fortunate when the International Olympic Committee (IOC) added long track speed skating events to the PyeongChang Olympics in June, 2015. Mass start is different than other speed skating races as 24 skaters all start together for the 16-lap race, which allows physical contact. The event works better for former short track speed skaters like Kim, as she is well trained in positions and corners.

“As a former short track speed skater, I skated a lot in smaller circle so I’m more comfortable in the inner curve,” Kim said.