Training camp starts to get ready for the WBC

Training camp starts to get ready for the WBC 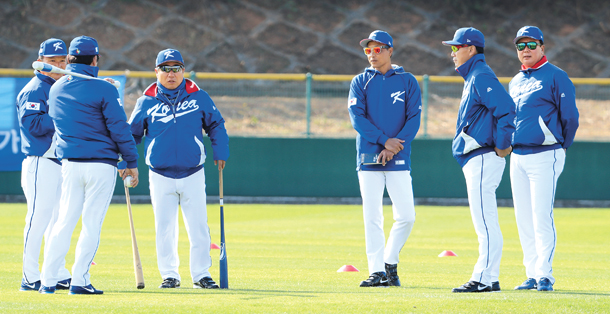 The Korean men’s baseball team started its first of ten days of training camp in preparation for the World Baseball Classic at the Gushikawa Urumashi Baseball Stadium in Okinawa, Japan, on Monday. [YONHAP]

Korea opened its training camp on Monday ahead of the World Baseball Classic (WBC) in Japan.

Managed by Kim In-sik, Korea brought 26 players from its 28-man roster to Uruma, Okinawa, to the start of the 10-day camp. They arrived Sunday.

The team will rest on every fourth day. During its stay in Japan, Korea will play practice games against two Nippon Professional Baseball (NPB) clubs - the Yomiuri Giants and the Yokohama DeNA BayStars - and a minor league affiliate of the Korean club LG Twins. Except on game days, the players will leave their hotel at 9 a.m. and train until 2 p.m.

St. Louis Cardinals closer Oh Seung-hwan, the lone major leaguer for the national team, will be in the Cards’ spring training and will join the national team in Seoul near the end of this month.’

Korea will host the first round action in Pool A at Gocheok Sky Dome in Seoul. Its first game will be against Israel on March 6, with the Netherlands (March 7) and Chinese Taipei (March 9) the other Pool A opponents.

The top two teams will move on to the second round against the top two representatives from Pool B in Tokyo. Pool B nations are Japan, Cuba, Australia and China.

In his inaugural team meeting, manager Kim called on the players to represent the country with pride and honor.

“You are here to represent the nation, and you should consider it a great privilege,” Kim told the players. “Let’s play for the honor of the country and of ourselves.”

When the players were first assembled last Saturday, Kim told reporters he felt the Netherlands would be Korea’s toughest opponent.

They’ll be joined by Jonathan Schoop of the Baltimore Orioles, Didi Gregorius of the New York Yankees and Jurickson Profar of the Texas Rangers.

On the mound, Korea will likely face Rick van den Hurk, former star pitcher for the KBO’s Samsung Lions currently pitching in the NPB. He’s familiar with most of the Korean national team hitters.

Once it returns from Japan, Korea will face Cuba on Feb. 25 and 26, and Australia on Feb. 28 in exhibition games.

Korea reached the semifinals at the inaugural WBC in 2006, and lost to Japan in the championship game in 2009. Korea was eliminated in the first round in 2013.

Manager Kim scrambled to put together a healthy 28-man roster. Missing key players to injuries, this year’s Korean team is considered the weakest bunch on paper among all of its WBC squads.

A handful of KBO stars pulled out following offseason surgeries. Among the country’s major league players, Los Angeles Dodgers’ Ryu Hyun-jin and Minnesota Twins’ Park Byung-ho were never considered because of injuries. Choo Shin-soo of the Texas Rangers and Kim Hyun-soo of the Orioles were dropped from the provisional roster because of their club commitments. Pittsburgh Pirates infielder Kang Jung-ho was cut from the team following a DUI accident in December.