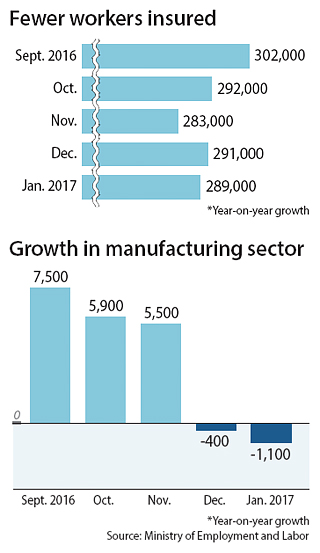 Layoffs coming as a result of corporate restructuring continue to take their toll on the local labor market, the government said Monday, with a slowing of growth in the number of workers with four basic forms of insurance: national health insurance, pension service, occupational health and safety insurance and unemployment insurance.

Last month, the number of employees with basic insurance rose 2.4 percent year on year, or by 289,000 to 12.5 million. That growth was a lot lower than the 441,000 recorded in January last year. The number remained below the 300,000 level for the fourth consecutive year, indicating fewer people are finding salaried positions than in the past.

The number of newly insured workers in the manufacturing sector dropped 1.1 percent, or by 1,100, compared to previous year to reach 3.57 million, the Ministry of Employment and Labor said. That was the second consecutive month for such a decline and the government blamed ongoing corporate restructuring and a generally weak economy.

The same figure dropped 0.4 percent in December. That was the first time since October 2009, in the midst of the global financial meltdown, that the number of insured workers in the manufacturing sector dropped compared to the previous year.

“Corporate restructuring in the shipbuilding industry is still ongoing and exports that have rebounded a bit seem to be having a limited impact on raising the number of workers in the manufacturing sector,” said Yang Hyun-soo, a director at the Labor Ministry. “The number of manufacturing workers in food- and chemical-related sectors has risen largely due to expanding pre-cooked food and cosmetics markets. But the electronics and telecommunication sectors, which account for the most workers in manufacturing, continued to drop for the 37th consecutive month or since January 2014.”

The number of workers with basic insurance in transportation and machinery remained low last month as well.

The government said the food manufacturing sector is growing largely due to the rise of single households, which creates new demand for pre-cooked food products, and that is having a positive impact on raising the employment rate for women.

Meanwhile, the number of workers with basic insurance rose by the most in lodging- and restaurant-related sectors (up 9.7 percent), followed by arts, sports and leisure businesses (7.1 percent) and science and technology sectors (5.6 percent).