Nothing but a passing fad

Nothing but a passing fad 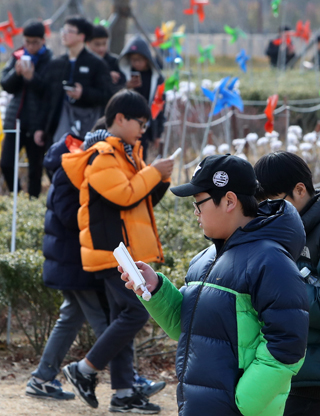 “We have arrived at the Holy Land. Take your phone out,” excitedly said a woman in her 20s to her friend at Boramae Park, southern Seoul last weekend. They both took out their phones and began to focus. They were immersed in a mobile game using augmented reality, Pokémon Go. Boramae Park is considered the Holy Land among the players as there are many Poké Stops, where players can receive free Pokéballs needed to capture Pokémon, and rare Pokémon like Pikachu are spotted here. Despite the cold weather, hundreds of people visited the park to play the game. Pokémon Go was released on Jan. 24 in Korea, about seven months later than other nations. But it is very popular with more than 10 million downloads.

In August 2014, Haitai’s Honey Butter Chip stirred up the market. Celebrities posted on social media about the snack, and people started lining up in the early morning to buy it. On a foreign auction site, a bag costing 1,500 won ($1.30) was sold at 20,000 won. Haitai, which had always had the smallest market share in potato chips, dominated the market immediately, and the stock price of Crown, the mother company, went up by four times over a year.

Robert Cialdini, the author of “Pre-Suasion: A Revolutionary Way to Influence and Persuade,” analyzed how other people have a big impact on human behavior. In 2009, Her Majesty’s Revenue and Customs of the United Kingdom tried a new experiment to tackle growing tax delinquency. The tax collection rate, which had been 57 percent in the previous year, went up to 86 percent after this experiment.

In the notice, the HM Revenue and Customs added a sentence with the percentage of British people who paid tax. Instead of threatening that failure to pay tax resulted in penalties and legal actions, it delivered a message that most British people faithfully paid their taxes.

On the other side of a fad is the psychology of wanting to do what others do.

Of course, Pokémon Go is an interesting game using augmented reality that integrates virtual information with real-life surroundings, evolving characters and engaging in battles. Honey Butter Chips were a refreshing twist in the potato chip market dominated by savory varieties. But the popularity of Pokémon Go has already subsided in Japan, and sales of Honey Butter Chips have stalled despite doubling the production facility last year.

Freshness grows old soon, and consumers’ interest moves on. Steve Jobs was always attracted to more revolutionary changes and urged to push constantly for innovation. Unless we constantly pursue freshness and innovation, popularity is nothing but a passing fad.


*The author is the head of Innovation Lab of the JoongAng Ilbo.