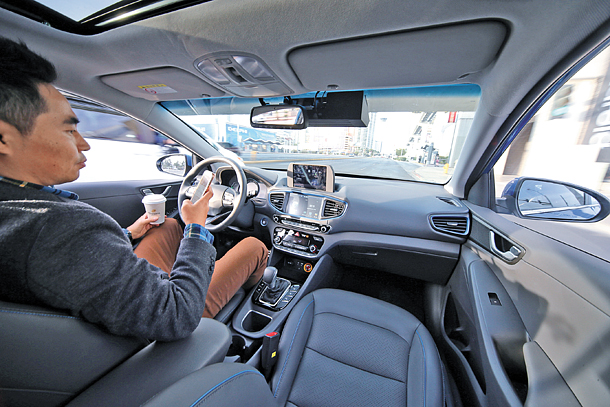 Hyundai Motor Group will establish an integrated research lab dedicated to autonomous driving technology in its latest attempt to boost its presence in the competitive industry. It successfully showed off its advances by demonstrating a self-driving version of the electric Ioniq, pictured, at the Consumer Electronics Show in January. [HYUNDAI MOTOR GROUP]

Hyundai Motor Group will establish a one-stop research center dedicated to driverless car technology in its latest move to amp up its future mobility competitiveness on the global stage, the automaker said Monday.

The center, dubbed the “Intelligent Safety Technology Center,” is an integrated version of two Hyundai Motor labs that had been separately working on technology related to safety mechanics and autonomous driving.

“The center will oversee the entire development process of autonomous driving technology, from laying the initial foundation to testing and analyzing the technology as well as implementing it on mass-produced cars,” the company said in a statement.

Hyundai Motor appointed Lee Jin-woo to lead the research center. Lee previously had been a staff researcher at General Motors’ equivalent research lab in Detroit since 2006. He also served as a research professor of mechanics at Cornell University.

“Hyundai Motor and Kia Motors will strive to establish a global autonomous driving platform that is beyond a mere development of self-driving cars,” Lee said.

The world’s No. 5 automaker by sales has been working on future car technology for 15 years, when the concept of a self-driving car was still vague and new to the public.

It has been mass-producing related technology such as the Smart Cruise Control which uses the front radar to control distance with the car in front and Lane Keeping Assist which helps driver to keep all wheels within the driving lane. Upgrading these features as well as newly developing artificial intelligence-based car technology will be the new center’s responsibility.

Hyundai Motor pledged to complete the development of “door-to-door” technology,” which enables the car to control itself from turning on the engine to parking at the destination.

Competition among global carmakers as well as IT companies to make the most advanced and safe driverless car is fierce as the world is increasingly expecting to see a literally self-driving car.

Global market research firm Juniper Research expects that there will be some 22 million autonomous cars - either fully or partially - on roads by 2025. Market research firm IHS estimated some 600,000 self-driving vehicles to be sold annually by 2025 and grow an average of 43 percent yearly for the next 10 years.

Global alliances have been made to keep up with the fast-changing industry and Hyundai Motor jumped on the bandwagon last year by joining a 27-member multinational consortium dedicated to autonomous driving technology. There are 12 carmakers including General Motors and Toyota.

Hyundai Motor introduced a self-driving version of its electric Ioniq model at this year’s Consumer Electronics Show in Las Vegas.