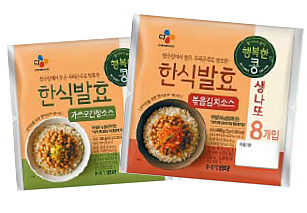 Kim, a 70-year-old homemaker, has had the Japanese bean dish natto on her dinner table for 10 years. While she long has bought packages from Japan or in an imported goods shop, she has been buying them straight off the shelves of local supermarkets in the last few months.

A Japanese soul food made of fermented beans, natto is expanding its presence in the Korean food market, with local companies developing their own products.

CJ CheilJedang released its CJ CheilJedang Korean Natto on Monday. The product was made from domestic beans and extracted from cheonggukjang, a Korean version of fermented beans similar to natto.

“Our focus was to pull in more people to try natto by adding flavors they’re more used to eating,” said Lee Dong-joon, a CJ brand manager.

Full of protein, beneficial bacteria and fiber, natto became widely known in Korea for its effectiveness for health and long life - an attractive factor for older consumers like Kim. Many celebrities credited natto for their weight loss which fueled its popularity.

Despite its health advantages, natto is not an easy food to initially try due to its strong smell and slimy texture. This is why local companies cater to Korean consumers’ tastes with local ingredients.