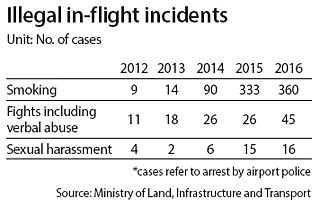 Illegal acts aboard airplanes, especially smoking, are on the rise, the Ministry of Land, Infrastructure and Transport said on Monday.

The number of violations, which include smoking, verbal abuse and sexual harassment in-flight, grew by 11 times from 2012 through 2016, a ministry report said, with the number of arrested smokers increasing by more than 40 times in the same period.

The number of brawls including verbal abuse grew from 11 cases in 2012 to 45 last year, while sexual harassment, mostly against flight attendants, rose from four cases in 2012 to 16 last year. The numbers only represent cases where violators were arrested by airport police, the ministry said in the report.

“Such increases are largely due to weak punishment on violations,” said Hong Chul-ho, a lawmaker from the Bareun Party, a spinoff of the former Saenuri Party, in a statement on Monday. “Currently, violators are subject to less than 10 million won ($8,678) in fines under the Aviation Safety and Security Act, but in real life less than 1 million won fine is imposed.”

Referring to aviation law in the United States where violators of banned actions in flight, such as violence, threat and work disturbance, are subject to a maximum 20 years of imprisonment, Hong added,

“Those causing affray and drunkenly disturbing other passengers in the air should be subject to the maximum 10 years of imprisonment and the amount of fines on smokers should be increased.”

Most recently, a 34-year-old business-class passenger drunkenly attacked passengers and crew members on a Korean Air flight from Hanoi to Seoul in December, bringing nationwide attention to in-flight violations.

After the incident, Korean Air strengthened its response guidelines to passenger disturbances. The nation’s largest air carrier decided to improve guidelines related to the use of a Taser gun, an electroshock weapon used in in-flight safety control, so cabin crew can more effectively handle emergencies. It will add mock practices of emergency situations and increase the number of training sessions for cabin pursers and assistant pursers in charge of in-flight control.