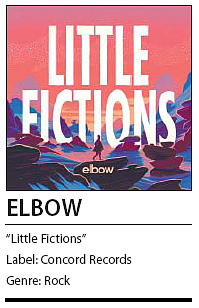 Less, it turns out, is more for the British band Elbow. On their seventh studio album, the art-rockers have lost a founding member, but the music they deliver is some of the best they’ve made in years.

“Little Fictions,” Elbow’s first album since 2014’s “The Take Off and Landing of Everything,” has typical band touches - a swelling orchestra, the unmistakably smoky voice of Guy Garvey and some moderately depressing lyrics - but it’s easily one of the band’s most accessible.

That may be due to a major change in their engine room. This is Elbow’s first release as a four-piece group, following the departure of drummer Richard Jupp, and that has resulted in some airy, electronic beats at the heart of many songs. It’s the closest you can be to dancing to an Elbow record.

The change means the band members have finally gotten out of their own way, allowing their blend of dreamy, romantic craftsmanship to go wherever it wants to. Might other bands find creative freedom by jettisoning a bandmate? Why do bassists across the country suddenly look so nervous? AP