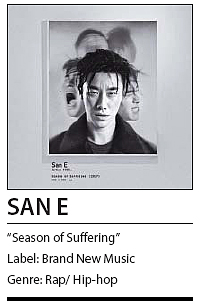 Hip-hop artist San E confesses his feelings and once again shows his rapping prowess that mesmerized the hip-hop scene when he first debuted in 2008, with new EP, “Season of Suffering.” After experiencing mainstream success with the singles “Story of Someone I Know,” and “Where Did You Sleep,” San E returns to his hip-hop roots with this seven-track album almost two years after the release of his first record, “The Boy Who Cried Wolf.”

The style is in stark difference to his previous entries. Pop-friendly instrumental are replaced for hard-hitting trap beats, and love-themed lyrics make way for ear-splitting rhymes and witty wordplay, earning him the title of “rap genius” in Korea.

He also moves on from his catchy hooks, focusing more on content than tunes, which has been his focus for most of his career.

San E doesn’t play it safe in this album, rapping about politics on “Bad Year” and inner conflict on “Counselor” and “Lost In Myself.” He shows that he won’t let criticism go to his head in lead single, “I Am Me.”