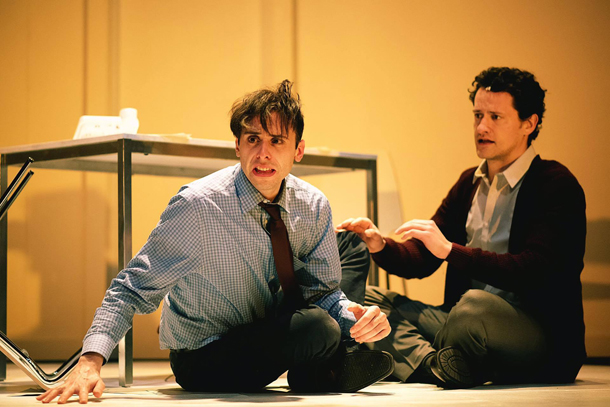 Korean original musical “Interview” kicked off its run at an Off Broadway theater on Friday. The mystery thriller musical has been adapted into an English version and cast American actors including Josh Bardier, left, who plays the role of Sinclair, and Adam Dietlein as Dr. Eugene Harper. [NAMSIK KIM]

Korea’s psycho musical thriller “Interview” made its Off Broadway premiere at the Theatre at St. Clement’s on Friday, becoming the first Korean original musical adapted for American audiences to open in New York City.

Despite being the third largest market for musical theater after New York and London, Korea’s musical scene has so far been largely dominated by Korean productions of licensed musicals. If “Interview” manages to draw favorable reviews, it may well mark the beginning of Korean original musicals being licensed and reproduced for Broadway and the West End.

Indeed, there are Korean musicals that peaked interest in New York and even the West End prior to the “Interview.”

Korean musical godfather Yun Ho-jin’s “The Last Empress” was in fact the first Korean musical to be introduced in New York in 1997. It was staged again the following year at the Lincoln Center. Korean patriotic musical “Hero,” also produced and directed by Yun, was performed at the Lincoln Center in 2011. But they were both performed in Korean with English subtitles. When “The Last Empress” went to London’s West End in 2002, following a wave of enthusiastic reviews from New York, Yun decided to translate the lyrics into English. However, the show was harshly criticized after audiences found the translation too literal and difficult to understand. 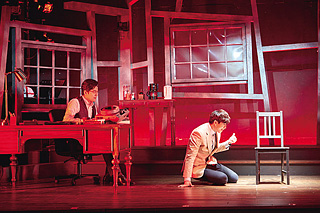 “Interview” had its two-week premiere run in July followed by a three-month run in September 2016 in Seoul. [JOONGANG ILBO]

In that sense, “Interview” plays a significant role in confirming if Korean musicals can successfully adapted to suit the palate of English-speaking audiences, says performing arts critic Kang Icc-mo.

“We know that ‘The Last Empress’ didn’t really do well overseas because first, it’s Korean history that people from the West are not that interested in. Second, that kind of story in Korean with English subtitles, or with poorly translated English lyrics, will not satisfy them,” he added. “But if it’s being performed in English by Western cast members, it definitely has a chance.”

Kang had just returned from New York, where he had spent a month watching almost all the musicals being performed on Broadway and Off Broadway and witnessed that “only about 20 out of about 56 theaters I went to were [staging] well-known shows.”

“Many of the musicals in Off Broadway theaters are never heard of. I think ‘Interview’ will be treated as one of those - one of dozens of musicals hoping to make it to Broadway,” he added.

“Interview” is a thriller, revolving around a 10-year-old murder case, narrated through an interview between a psychologist and a best selling mystery writer Dr. Eugene Harper and Matt Sinclair, an apprentice. The two begin to talk about the monsters inside them and about the real victim of a murder case that happened 10 years ago. “Interview” premiered in Seoul last May and was taken to Kyoto and Tokyo for sold-out shows before making it to New York.

Because this mystery story appeals to an international audience, actor Kim Soo-ro, who is a producer of the musical, said that he “wanted to take it abroad as soon as he read the script.”

“Since the story deals with social problems that exist across the globe like child abuse, I thought instantly that people in other parts of the world could also sympathize,” he said last September during a press conference for the show in Seoul. “I was really glad when Japan offered to stage it first … I’ve produced numerous musicals so far and there hasn’t been any musical that drew in such enthusiastic offers from foreign producers like ‘Interview.’” 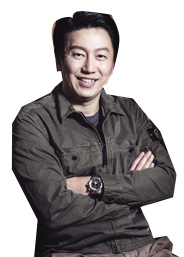 The show is in fact one of a series of musicals that Kim has been producing in Seoul in an attempt to solidify the ground for Korean original musicals in their own motherland, where licensed musicals dominate the market.

For “Interview,” Kim brought in his actor friend Kim Min-jong as a co-producer. It was originally written by Choo Jung-hwa with music by Huh Soo-hyun.

For the Off Broadway version, Kim’s production company Double K Film & Theatre sought help from Bryan Michaels to work on the English lyrics and translation, while having Korean director Kim Hyun-jun, who also goes by Dimo, and Yossef K on board to co-direct the show in New York.

“I put my faith in a 1 percent success rate and brought this musical from Korea to the U.S.,” said producer Kim during the show’s media call on Feb. 6. “After working hard with the creative team here in New York, I began to have more confidence.”

“Although I still think that it only has a 1 percent chance of making it to Broadway [after this Off Broadway run], I really hope that it happens and that today is remembered as the beginning of a legend.”

“Since it’s the first time that a Korean original musical is being adapted into an English-language musical with a western cast, we went through delicate preparations, paying attention to the translation as well as the difference in sentiments between Koreans and Americans,” said Dimo. “We are so delighted to see tickets to a Korean original musical being sold at TKTS booths in New York’s Times Square. It wasn’t easy but it feels great to pioneer a new market.”

The Off Broadway version of “Interview” stars Josh Bardier, who plays the role of Sinclair and Adam Dietlein as Dr. Eugene Harper. The show’s only female character Joanne Bevington will be played by Erin Kommor, who is making an Off Broadway debut herself.

Kommor also said after the media call that although the original musical wasn’t written in English, it is indeed a story that all audiences can sympathize with.

“It’s a pleasure to bring this new musical from Korea to the American theater,” said Dimo. “Over the past 20 years, the Korean musical theater market has been dominated with Broadway licensed musicals. We are fortunate to have this original musical premiere in Seoul and now opening Off Broadway.”

Korean director Yossef K, known for his recent play “Q” which was staged in Daehagno, central Seoul, last year, is co-directing the show and said that “art and theater have no frontiers.”


Tickets for the show are available at www.interviewmusical.com.